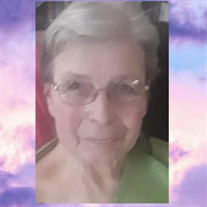 Veleeta Lynn (Duncan) Edgar, was called home to be with her Lord, on March 11, 2022, at the age of 74. Veleeta was born to Travis R. Duncan and Izola (Sprowls) Duncan, in Pauls Valley, Oklahoma, on September 12, 1947. Veleeta was raised on a plot of land in rural Lindsay and has lived there all of her life there. She was a devoted Christian and member of Hughes Baptist Church. Veleeta married Doyle Rayburn Edgar on January 27, 1973, in Lindsay, Oklahoma. There were two children born to this union, Sarah and Doyle II. Veleeta spent her life as a homemaker taking care of her husband and her children. She was a caring wife, loving mother and grandmother. Veleeta and Rayburn celebrated fifteen years together before his passing in February 1988. Veleeta enjoyed reading and watching tv. In recent years she had picked up playing games on her cell phone to pass the time. She enjoyed the comfort of her home but she would occasionally enjoy a good shopping spree. Veleeta was all about her family and she counted them her greatest blessing. Watching her grandchildren was her greatest pastime. The laughter and memories she shared with her grands was what she lived for. Left to cherish her memory are her children, Sarah Lawson with her husband Roger, of Lindsay and Doyle Edgar II of Lindsay, and grandchildren, Emily Lawson, Isaac Lawson, and Justin Lawson. She is preceded in death by her parents, T. R. and Izola Duncan, and husband, Rayburn Edgar, a sister, Barbara Troub, brother-in-law, Leon Troub, and grandchildren, Karen and Casey Lawson. A funeral service to honor the life of Veleeta is set to begin at 10:00 A.M. on Wednesday, March 16, 2022, at the Hughes Baptist Church, with Ronnie Blankenship officiating. She will be laid to rest at the Erin Springs Cemetery following the service. Services are under the direction of Scott and Angel Wilbourn of Wilbourn Family Funeral Home in Lindsay, Oklahoma. Condolences may be made to the family online at wwwilbournfamilyfuneralhome.com

Veleeta Lynn (Duncan) Edgar, was called home to be with her Lord, on March 11, 2022, at the age of 74. Veleeta was born to Travis R. Duncan and Izola (Sprowls) Duncan, in Pauls Valley, Oklahoma, on September 12, 1947. Veleeta was raised on... View Obituary & Service Information

The family of Veleeta Lynn Edgar created this Life Tributes page to make it easy to share your memories.

Veleeta Lynn (Duncan) Edgar, was called home to be with her Lord,...

Send flowers to the Edgar family.