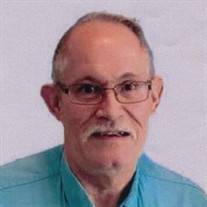 Thomas Wayne Dickerson was born on June 23, 1955 in Terrell, Kaufman County, Texas, to Eulie Truman Dickerson and Leona (Askew) Dickerson. Thomas left this life on Friday, October 15, 2021, in Oklahoma City, Oklahoma, and proceeded to meet his Lord and Savior in Heaven and be rejoined with family and friends that preceded him in death. He is preceded in death by paternal grandparents, Silas and Frances Elizabeth (Kirkpatrick) Dickerson and maternal grandparents, James Daniel and Bertha Ruth (Vandivere) Askew. He was also preceded in death by his parents, Eulie Truman and Leona (Askew) Dickerson and his brothers, Glynn Wilburn, Travis Edward, and James Silas Dickerson. Thomas is survived by his wife, Frances Maritza Dickerson, who he married on March 28, 1987, in Houston, Texas. He is survived by a brother, Charles Lee Dickerson and wife Ann, of Emory, Texas and by sisters, Leona Bowshier of Ponder, Texas, Imogene Kirkpatrick of Mineola, Texas, and Martha Skinner and husband John of Garland, Texas. Thomas is also survived by numerous nieces and nephews as well as many friends. Thomas accepted Christ as his Savior at the age of eleven and felt the call to preach the Gospel, which he accepted at the age of thirteen. After graduating from Forney High School, he enrolled in Jacksonville College where he earned an Associate of Arts degree in Religious Education in 1975. He earned his Bachelor of Arts degree in 1977 from University of Texas-Tyler and his Master of Divinity degree from Baptist Missionary Theological Seminary in Jacksonville in 1983. His current church membership is with Lindsay Missionary Baptist Church in Lindsay, Oklahoma. Thomas served as youth pastor for Enterprise Baptist Church in Jacksonville, Texas, from 1973 to 1975 and South Tyler Baptist Church from 1975 to 1979. He then served the following churches as pastor: Sardis, Jewett, 1979; Union Grove, Troup, 1980 to 1983; Clear Creek, Marquez, 1984. Thomas served as pastor/church planter for Eastside Ennis, 1985 to 1986. Afterwards he moved to Houston, Texas, where he served as a Cell-Group Leader for Centro de Vida, 1987 to 1989. Thomas and his wife then moved to Tucson, Arizona, where he started a Spanish church plant in Bethany, Tucson, 1989 to 1990. He later became mission pastor of Primera Iglesia Bautista in Marana, Arizona, 1990 to 1992. While living in Arizona, Thomas taught extension courses in Spanish for Golden Gate Seminary from 1990 to 1993. He travelled in northern Mexico, preaching in revivals and providing pulpit supplies in Spanish. Upon returning to Texas, Thomas served as Associate Pastor of Nueva Esperanza in Royce City beginning in 2000. He then served as pastor of Central Baptist Church, Lancaster, from 2004 to 2006. He served as greeter, usher, Bible teacher, and filled the pulpit in the absence of the pastor at Webb Chapel Baptist Church. He was currently serving as pastor of Lindsay Missionary Baptist Church in Lindsay, Oklahoma. Thomas also worked professionally as a mental health caseworker, caseworker in both Senior and Child Protective Serves and an institutional parole officer in the criminal justice system. For the last years of his working career, other than pastoring, Thomas was employed with the City of Dallas, retiring in 2013. A private service to honor Thomas was held at 1:00 P.M. on Sunday, October 18, 2021, at the Wilbourn Family Funeral Home Chapel in Lindsay, Oklahoma.

The family of Thomas Wayne Dickerson created this Life Tributes page to make it easy to share your memories.

Send flowers to the Dickerson family.