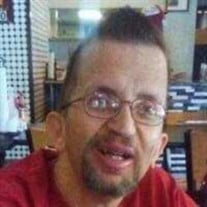 Samuel Jason Herfel was born June 26, 1971 to Loren and Wilma (Stephenson) Herfel in Madison, Wisconsin. Sam entered into his eternal rest on February 3, 2021, in Norman, Oklahoma, at the age of 49. Sam was born without a natural pressure regulator to control the fluid that surrounds the brain. He was the very first experimental recipient of what is commonly known as the shunt valve. After multiple experimental operations, the shunt was successful in controlling the fluid pressure around the brain. These groundbreaking experiments that Sam participated in paved the way for future development and application that has saved countless thousands of lives all over the world. Although Sam endured many physical hardships and limitations, you would have never known it from his attitude or the smile on his face. No matter how sick or how much pain he was in Sam never complained. Sam found joy in the small things in life such as riding on a golf cart, driving the scooter around Walmart or his most favorite thing watching westerns and wrestling on tv however, Sam’s one true love in life was his mother and his wallet. Sam loved without limits and never meeting a stranger, never holding grudges, always accepting of anyone and everyone and was by everyone in return. Although Sam was nearly 50 years old, he lived his life with the perpetual purity of a child, never taking on the dark habits of the world, and living only in joy and light. The world is a much darker place without him. Sam will be deeply missed by all that knew him. Left to cherish his memory is his father, Loren Herfel and wife Paula of Minco, Oklahoma, his brother, Jerry Noles and wife Allison of Blanchard, Oklahoma, his sisters, Carol Sue Mendenhall of Purcell, Oklahoma, Ginger Griffin and husband Johnny of Purcell, Oklahoma, and Katie Herfel of Minco, Oklahoma, along with many nieces, nephews, uncles, aunts, and friends. Sam is preceded in death by his grandparents, James Cecil and Juanita Cannon, J.T. Essary, and Stanley and Leona Herfel, his mother, Wilma Stephenson, and a brother-in-law, Robert Mendenhall. A funeral service to honor the life of Sam is set to begin at 11:00 A.M. on Monday, February 8, 2021 at the Wilbourn Family Funeral Home Chapel located at 308 S.W. 3rd Street in Lindsay, Oklahoma. He will be laid to his final rest at the Green Hill Cemetery in Lindsay, Oklahoma following the service. His funeral service will be live streamed on the Wilbourn Family Funeral Home Facebook page. Services are under the direction of Scott and Angel Wilbourn of Wilbourn Family Funeral Home in Lindsay, Oklahoma.

Samuel Jason Herfel was born June 26, 1971 to Loren and Wilma (Stephenson) Herfel in Madison, Wisconsin. Sam entered into his eternal rest on February 3, 2021, in Norman, Oklahoma, at the age of 49. Sam was born without a natural pressure... View Obituary & Service Information

The family of Samuel Jason Herfel created this Life Tributes page to make it easy to share your memories.

Send flowers to the Herfel family.