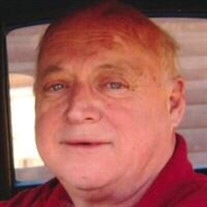 Roy Lee Criss Jr., a Maysville resident, was born on March 7, 1944, in Oklahoma City, Oklahoma, to Roy Lee Criss Sr. and Mary Lea (Rains) Criss. He was called home to be with his Lord and Savior on January 25, 2021, at the age 76. Roy graduated from Capitol Hill High School in Oklahoma City in 1962. In 1972, Roy moved his family to Maysville, Oklahoma where he started his own business, Criss Automotive. He was a gifted mechanic and enjoyed the work he did. His wife always called him “Over Kill Roy” because he never stopped. Roy was introduced to Donna Marie Brotherton at the age of 16. They were joined in marriage on May 5, 1962. Born to this union was three children, Robin, Ryan, and Wren. They celebrated 58 years of oneness, friendship, and love. Roy was a true example of what a godly husband, father, and grandfather should be. He was a true family man, his whole world revolved around them. Roy loved Jesus, and one did not meet Roy without also hearing about his Lord. He spent much of his “down time” traveling with his wife and their dear friend Dianna, as “Homeward Bound” southern gospel trio. Their music ministry took them all over the country, and many beautiful friendships were made along the way. Roy Criss was a giant of a man. He loved big. Everything he did, he did wholeheartedly. He gave big gifts to his family. He did vacations big. His door was always open for anyone who needed a listening ear and sound wisdom. He was always willing to give of himself, his time, and resources. He lived what he believed and walked out his faith in every aspect of his life. He will be and is already so missed by our family. Though our small, giant of a man has passed on from our presence, we know where he is, Who he is with, and that his arms will be open wide to hug each of us when we get there. Left to cherish his memory is his loving wife Donna Criss of the home, daughters, Robin Criss of Maysville and Wren Rains and husband Jamie of Elmore City, and his grandchildren, Alishia Spray of Newcastle, Elijah Spray and wife Misty of Wagner, Calvin Blankenship and wife Lauren of Glenpool, Chloe King and husband Stephen of Norman, Caleb Blankenship and wife Stephanie of Lindsay, and Ryan Rains of Elmore City, and great grandchildren, Quentin, Wiley, Raylan, Jadyn, Sebastian, Kennedy, and Eliana, a daughter-in-law, Sandra Wardwell, and several beloved nieces and nephews. He is preceded in death by his parents, Roy and Mary Criss, his son, Ryan Criss, and two sisters, Loretta Jackson and Virginia Pringle. Visitation for Roy will be held Thursday, January 28, 2021 from 9:00 A.M. until 12:00 P.M. at Abundant Love Fellowship in Maysville, Oklahoma. A funeral service to honor the life of Roy is set to begin at 1:00 P.M. on Thursday, January 28, 2021 at the Abundant Love Fellowship in Maysville, Oklahoma. He will be laid to rest next to his son at the Maysville Cemetery in Maysville, Oklahoma. Services are under the direction of Scott and Angel Wilbourn of Wilbourn Family Funeral Home.

Roy Lee Criss Jr., a Maysville resident, was born on March 7, 1944, in Oklahoma City, Oklahoma, to Roy Lee Criss Sr. and Mary Lea (Rains) Criss. He was called home to be with his Lord and Savior on January 25, 2021, at the age 76. Roy graduated... View Obituary & Service Information

The family of Roy Lee Criss Jr. created this Life Tributes page to make it easy to share your memories.

Send flowers to the Criss family.