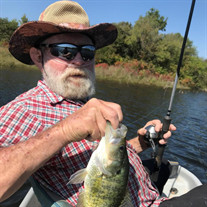 Ronald Ferrell Webb entered his eternal reward on December 13, 2021, in Oklahoma City, Oklahoma, at the age of 72. He was born to L. V. Webb and Virginia Maple (Henley) Webb, on December 30, 1948, in Oklahoma City, Oklahoma. Ronnie has lived in the Lindsay and Dibble area all of his life. He was a graduate of the Dibble High School in Dibble Oklahoma. Ronnie proudly served in the United States Army from 1967 to 1969. Ronnie married the love of his life Vicki Lee (Hawkins) Webb on October 28, 1988, in Shawnee, Oklahoma. They celebrated thirty-three years together full of wonderful memories and love. Ronnie was a loving husband, caring father, and fun grandfather. Ronnie was a true outdoorsman and country boy. He was an old soul and loved the beauty of antiques. One of his favorite outdoor pastimes was fishing and the peace that could be found out on the water. Ronnie also liked to take the old and make it new again. He found great enjoyment in buying old tractors and restoring them to their former glory before finding them new homes that would appreciate them as much as he did. Ronnie was a jack of all trades and dabbled in gardening, landscaping, welding, and carpentry. There was nothing that he could not do once he set his mind to it. Hunting for arrowheads was another hobby he enjoyed. Left to cherish his memory are his loving wife, Vicki Webb of Lindsay, son, Jeremy Webb of Cashion, stepdaughter, Kristen Cowell of Seminole, brother, Don Webb and wife Wanda of Davis, sister, Loretta Sparks of Chickasha, four step-granddaughters, Kaitlyn, Hailey, Jazmine, and Brooklyn, and one step great-grandson, Roman. Ronnie is preceded in death by his parents. L. V. and Virginia Webb and sister Darleen Smith. A memorial service to honor the life of Ronnie is set to begin at 1:00 P.M. on Saturday, December 18, 2021, at the Banner Baptist Church located at 13635 State Highway 76 in Lindsay with Pastor Mark Smith officiating. Services are under the direction of Scott and Angel Wilbourn of Wilbourn Family Funeral Home in Lindsay, Oklahoma. Condolences may be made to the family online at www.wilbournfamilyfuneralhome.com

The family of Ronald Ferrell Webb created this Life Tributes page to make it easy to share your memories.

Send flowers to the Webb family.