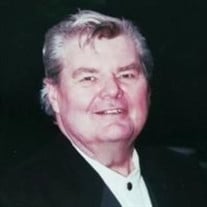 On Wednesday, December 23, 2020, Robert Cecil “R.C. Tiny” James, loving husband, father, grandfather and great-grandfather, passed away at age 77. R.C., also called “Tiny,” was born on January 13, 1943 in Altus, Oklahoma, to Cecil Henry and Letha Joyce James. He married his wife of 55 years, Phyllis, on December 11, 1965, in Clarksdale, Mississippi. He became a resident of Lindsay, Oklahoma after he retired from serving as a pastor. Tiny enjoyed helping others, and spent part of his life in evangelical work in the United States. He also served as a missionary for several years, planting churches and helping communities in several parts of Mexico. He enjoyed reading and hunting in his spare time, but he enjoyed fishing the most. Left to cherish his memory are his wife Phyllis, his son Greg James (Sandy), his daughter Ginger Armstrong (Kristopher), his grandchildren Robert, Allie, Jon, Anna, Justin, Anthony, Ashlee, Mercy and Austin, and several great-grandchildren. Tiny is preceded in death by his parents, Cecil and Letha James, and his youngest daughter, Kristi Ann James-Cantu. A service celebrating R.C,’s life will be held at 3:00 p.m. on Tuesday, December 29, 2020 at the Boydston-Wilbourn Funeral Home in Lindsay, Oklahoma. Services are under the direction of Scott and Angel Wilbourn of Boydston-Wilbourn Funeral Home in Lindsay, Oklahoma. Condolences may be made to the family online at www.boydstonfuneralhome.com

The family of Robert Cecil James created this Life Tributes page to make it easy to share your memories.

Send flowers to the James family.