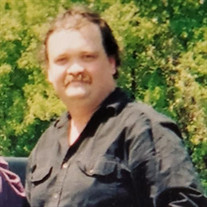 Ricky Joe Murphy passed from this life on April 20, 2021, in Pauls Valley, Oklahoma, at the age of 49. Ricky was born on July 19, 1971, to Marland Lee Murphy and Ruby Charline (Thomason) Murphy, in Pauls Valley, Oklahoma. Ricky attended and graduated from Lindsay High School in Lindsay, Oklahoma. Ricky lived in Lindsay, Oklahoma, most of his life other than a brief time he spent living in Shawnee, Oklahoma. He worked for Lindsay Ford until they closed detailing cars and doing whatever else was needed. Ricky attended services at the Salvation Army. Ricky found great enjoyment in listening to his favorite rock band KISS, reading his Bible, and watching wrestling matches. He was also a big OSU fan. Ricky loved fast cars, driving fast, and always wanted to own a Mustang. Ricky was preceded in death by his grandparents C.H. and Ruby Mae Thomason and John and Louise Murphy, and his sister Sheila Murphy. Ricky is survived by his parents Marland and Ruby Murphy of Chickahsa, Oklahoma; his sister Thelma Wall and husband Jonnie of Woodward, Oklahoma; his sister Teresa Phelps of Chickasha, Oklahoma; his brother Billy Murphy and wife Carolyn of Pawnee, Oklahoma; and a host of family and friends. A graveside service to honor Ricky’s life is set to begin at 2:00 P.M. Thursday, April 22, 2021, at Green Hill Cemetery in Lindsay, Oklahoma. Funeral services are under the direction of Scott and Angel Wilbourn of Wilbourn Family Funeral Home in Lindsay, Oklahoma. Condolences may be made to the family at www.wilbournfamilyfuneralhome.com

The family of Ricky Joe Murphy created this Life Tributes page to make it easy to share your memories.

Send flowers to the Murphy family.