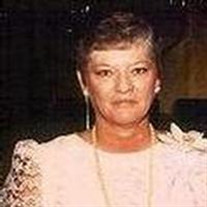 Patricia Ann "Patsy" Morris, age 61, passed away May 30, 2004, at her home south of Lindsay, Oklahoma. Patsy was born March 25, 1943 in Comanche, Oklahoma to Cliff and Mabel (Allen) Bowles. She moved with her family to Grover, Texas at an early age, later returning to Comanche with her family where she graduated from Comanche High School. Patsy married Lelon Morris at the Friendship Missionary Baptist Church, in Comanche, on January 18, 1964. Patsy and Lelon moved to Duncan, Oklahoma following their marriage, eventually moving on to Lindsay, Oklahoma. Patsy was retired from her work as a lab technician and enjoyed traveling with her husband, Lelon. She was a member of Freewill Baptist Church in Lindsay, and the Duncan Hi-Lifters. Patsy loved to spend time with her grandchildren and also enjoyed oil painting when not on travels with Lelon. Patsy is survived by her husband, Lelon of the home in Lindsay, Oklahoma. Patsy also leaves behind a daughter; DeLana and husband David Smith of Paradise, Texas, and a son; Monty and wife Jeannine Morris of Purcell, Oklahoma. Patsy is survived by her five grandchildren; Mallory, Matthew, and Dawson Smith, as well as Jenna and Macy Morris. Also surviving are brothers; Bobby and Dorothy Bowles of Comanche, Lynn and Carol Bowles of Duncan, Oklahoma, and one sister, Debbie Gray of Duncan, Oklahoma. Patsy is survived by her mother Mabel Bowles of Comanche, Oklahoma Patsy was preceded in death by her father, Cliff Bowles, as well as her grandparents; Bush and Iva Bowles, and Luther and Mattie Allen. Funeral services for Mrs. Morris will be held Wednesday, June 2, 2004, 10:30 a.m., at the Friendship Baptist Church in Comanche, Oklahoma. Pastor Joey Howeth will offer words of comfort. Pallbearers will include; Carl Johns, Robbie Bowles, David Smith, Monty Morris, Jimmie Morris and Ron Davenport. Honorary pallbearers will include Justin Morris, Brian Morris, Eric Davenport, Austin Bowles, Tanner Gray, and Tyler Gray. Public visitation hours will be Tuesday from 1:00 p.m. to 8:00. Arrangements are under the direction of B. G. Boydston Funeral Home in Lindsay, Oklahoma.

Patricia Ann "Patsy" Morris, age 61, passed away May 30, 2004, at her home south of Lindsay, Oklahoma. Patsy was born March 25, 1943 in Comanche, Oklahoma to Cliff and Mabel (Allen) Bowles. She moved with her family to Grover, Texas at an early... View Obituary & Service Information

The family of Patricia Ann Morris created this Life Tributes page to make it easy to share your memories.

Send flowers to the Morris family.