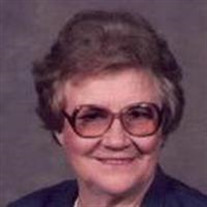 Orebel Knapp was born in Nelly, Stephens County, Oklahoma, on November 21, 1924, and passed away at her home in Lindsay, OK on April 29, 2001. On August 14, 1947, she married William Jackson Knapp in Gainsvelle, Texas. In 1949, Orebel and Bill moved to a farm in the Hughes Community near Lindsay where they lived until Bill?s death on March 31, 1974. After sellin the farm she moved to Lindsay. For the next twenty-seven years her life revolved around her children, grandchildren, and many friends. She looked forward to family gatherings and regularly attended high school sporting events in which her grandchildren participated. She love to watch and listen to OU basketball games and enjoyed working in her yard. She was a long-time member of the First Baptist Church and a member of the Fidelis Sunday School Class. Orebel is survived by her four children, Paula Conatser, Lindsay, Oklahoma; Suzie Jennings, Lindsay, OK; Chris Knapp, Norman, OK and wife Carol; and Becky Hakes of Midland, Texas and husband Sam. She is also survived by one sister, Bonnie Fielder, Moore, OK; one brother Bill DeBurger, Purcell, OK; and four granddaughters, Lesley Jennings, Lindsay, Knapp, and Jessica Knapp. In addition to her husband, Orebel was preceded in death by her parents, Earnest Aaron DeBurger and Mattie Etta Linton DeBurger; one brother, Aaron L.D. DeBurger; and one grandson, John William Knapp. Funeral arrangements are with B. G. Boydston Funeral Home in Lindsay, OK. Services will be at 2:00 p.m. Tuesday, May 1, 2001 in the First Baptist Church in Lindsay with Rev. Monty Baggett officiating. Burial will be in Green Hill Cemetery. Pallbearers are Bill Cowan, Bill Gibson, Lynn Rolen, Grady Bunch, Dale Howe and Bob Roberson.

The family of Orbel Christeen DeBurger Knapp created this Life Tributes page to make it easy to share your memories.

Orebel Knapp was born in Nelly, Stephens County, Oklahoma, on...