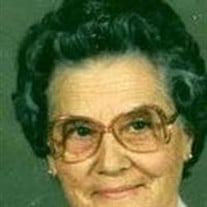 Morene Gregory, age 88, of Lindsay, passed away Wednesday, December 25, 2002 in Edmond . She was born on August 16, 1914 in Lindsay to Clint Webb and Lula Webb. Morene was a member of Erin Springs Baptist Church. Morene is survived by her children... View Obituary & Service Information

The family of Morene Gregory created this Life Tributes page to make it easy to share your memories.

Send flowers to the Gregory family.