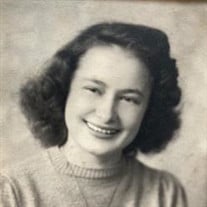 Mona Deane (Dodd) Gabbard went to her eternal home on February 5, 2022, at the age of 94, after a long illness. She was born in Lubbock, Texas, on December 5, 1927. Mona was the daughter of Clarence L. Dodd and Kaliteyo (Maytubby) Dodd. Her father had a career as a jewelry store owner and watch maker and her mother had a piano degree and was, for many years, the organist for the Lindsay Methodist church and local civic groups. Mona had an older sister Kay, and a twin sister Donna, who both predeceased her. Shortly after Mona’s birth, her family moved from Lubbock, Texas, to Lindsay, Oklahoma. Thereafter, Mona was a lifelong Lindsay resident. She graduated from Lindsay High School in 1945 and was Valedictorian of her class. Mona attended the University of Oklahoma for two years and then interrupted her education to marry James Douglas Gabbard, also of Lindsay. She often said they were the perfect match. She and Doug were born in the same month, grew up together, were childhood sweethearts, and were married more than 50 years until his death. Doug worked for and then became co-owner of Gordon White Lumber Company. The couple had three children, Doug Jr., Alan Bradley Gabbard, and Brian Dudley Gabbard. After her children were born Mona decided she wanted a career, and she went back to college. In 1965, she graduated from the Oklahoma College for Women in Chickasha, Oklahoma. She obtained a teaching certificate and began teaching at Lindsay Elementary School. Mona was a 3rd grade teacher for approximately 28 years. She was loved by her students, her fellow teachers, and the school administration. During her teaching career, Mona also served as president of the local Oklahoma Education Association. Mona was an intelligent, friendly, humorous, positive, kind, and vivacious person. She loved her family, assisted and cared for her mother and aunt in their senior years, supported her husband, and encouraged her sons to succeed. Mona had numerous friends, was active in the Methodist Church, and worked hard for her community. Mona was a proud member of the Chickasaw Nation. Her great grandfather, Peter Maytubby, was elected as Governor of the Chickasaw Nation and two of her uncles served as Presidentially appointed custodians of the tribe until tribal government was reinstated in the early 1970’s. Mona was proud of her Native American background, attributing her long life and good health to it, and instilled her tribal pride into her children. Mona loved to travel, and she and Doug traveled throughout the U.S. and Europe. But most of all, Mona loved her family. She was proud of each and every one of her children, grandchildren, and great grandchildren and often told her friends about them. Mona is survived by her sons, Doug Gabbard II and wife Pethi Gabbard of Atoka, Oklahoma, Brad Gabbard and partner Lezlie Forster of Boulder, Colorado, and Brian Gabbard of Oklahoma City, Oklahoma, her grandchildren, Bradley, Benjamin, David, Doug III, Michael, Resa, and Zach, and numerous great grandchildren. A funeral service to honor the life of Mona is set to begin at 10:00 A.M. on Wednesday, February 9, 2022, at Wilbourn Family Funeral Home Chapel in Lindsay, Oklahoma. She will be laid to rest following the service at Green Hill Cemetery in Lindsay, Oklahoma. Services are under the direction of Scott and Angel Wilbourn of Wilbourn Family Funeral Home in Lindsay, Oklahoma. Condolences may be made to the family at wilbournfamilyfuneralhome.com

Mona Deane (Dodd) Gabbard went to her eternal home on February 5, 2022, at the age of 94, after a long illness. She was born in Lubbock, Texas, on December 5, 1927. Mona was the daughter of Clarence L. Dodd and Kaliteyo (Maytubby) Dodd. Her... View Obituary & Service Information

The family of Mona Deane (Dodd) Gabbard created this Life Tributes page to make it easy to share your memories.

Send flowers to the Gabbard family.