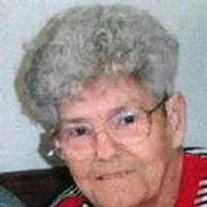 Pearl Holman, age 69 , of Lindsay, passed away, Friday, July 4, 2003 in Oklahoma City. She was born to Danney D. Lee and Bertha (Ward) Lee in Purcell, Oklahoma on August 9, 1933. Pearl lived in the Lindsay area most of her life. Before retirement... View Obituary & Service Information

The family of Lena Pearl Holman created this Life Tributes page to make it easy to share your memories.

Send flowers to the Holman family.