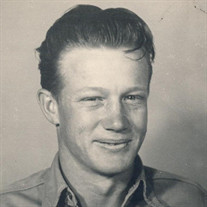 Jackson “Jack” Beaty Whitlow was born November 11, 1929, at the Mercy hospital in Brownsville, Texas, to John Felix Whitlow and Myrle Beaty Whitlow. He was a resident of Ninnekah, Oklahoma. Jack attended El Jardin Public Schools in Brownsville where in his senior year he also drove the school bus. Later in life, he would attend USAO college in Chickasha, Oklahoma. Jack was a hard worker from an early age, he began helping to unload various cargo ships at the Brownsville port with the grown men at the age of 14. Later in his teenage years, he would serve as a driver & hand for his grandfather and another gentleman driving them from Brownsville to the area around Ponca City to combine wheat. Later he would transport his grandfather to two farms in Minco, Oklahoma owned by an aunt and uncle. While there he performed several jobs ranging from operating farm equipment, tending livestock, and picking cotton. While working in Minco Jack met his wife Rachel Effie Durham when he played the part of Santa at a community function. Jack and Rachel were married on November 25, 1949, and remained married for 72 years. They live in Minco for a while, then moved to Chickasha, Oklahoma where Jack went to work as a machinist, until joining the Navy in 1952 where he served on the vessel Mauna Loa. Returning to Chickasha following his stint in the Navy, Jack returned to work for Chickasha Manufacturing and Badgett’s Machine Shop. Jack and Rachel rented a farm in the Ninnekah area where he milked cows by hand before going to work. He also raised pigs, chickens, hay, and cattle. Always looking for a way to earn extra money for his family, Jack hired himself out to local farmers to run farm equipment, haul hay, or do any other work they needed. When Rachel was expecting their third child Jack was hired out to paint the Ninnekah school interior to pay the doctor and hospital bills. Later in life, Jack would work with his two sons and a friend as a “crew” in the oil field until the oil boom left the area. At this time in his life, he went to work for Nowata Gardens as the maintenance supervisor where he would retire from, and then returned to work there every day until he was 88 years old and his health issues required that he retire again. From the marriage, Jack and Rachel had 3 children: John Edward Whitlow of Stanton, Kentucky, Mickey Eugene Whitlow of Chickasha, Oklahoma, and Anita Marie Fowler of Ninnekah, Oklahoma. He was preceded in death by his wife Rachel Whitlow, his parents John & Myrle Whitlow, one daughter-in-law Donna Whitlow and one son-in-law Charles R. Fowler Jr. He is survived by his 3 children and a host of grandchildren and great-grandchildren and nieces and nephews. A funeral service to honor the life of Jack is set to begin at 1:00 P.M. on Tuesday, April 19, 2022, at the First Baptist Church of Ninnekah in Ninnekah, Oklahoma, with Curtis Townley officiating. He will be laid to rest next to his wife at the Ninnekah Cemetery following the service. Services are under the direction of Scott and Angel Wilbourn of Wilbourn Family Funeral Home in Alex, Oklahoma. Condolences may be made to the family online at www.wilbournfamilyfuneralhome.com.

The family of Jackson "Jack" Beaty Whitlow created this Life Tributes page to make it easy to share your memories.

Send flowers to the Whitlow family.