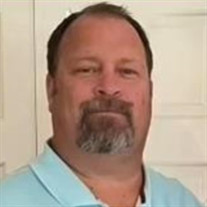 Greg “Dibble Flash” Horner, was born to Richard Clyde Horner and Barbara Jean (Langford) Smith, on April 16, 1970, in Lindsay, Oklahoma. He entered into his eternal rest on January 8, 2022, in Norman, Oklahoma, at the age of 51. Greg spent most of his childhood living in Moore, Oklahoma. During High School, he moved to Dibble, Oklahoma, and has been a resident ever since. Greg was a member of the Fat Guy Club and Bills Mafia. He has worked for the State of Oklahoma for over thirty years, working up the ladder from Asbestos Remover to Inspector. Greg married Shannon Renee Gray at Cory’s Cabin in Dibble, Oklahoma, on September 23, 1999. They celebrated twenty-four years together filled with love, laughs, and adventure. He was a loving husband, caring father, and fun grandfather. Greg found enjoyment being outside fishing and golfing. He also enjoyed smoking meat to feed those he loved. Greg was a sports fan and loved watching the Oklahoma Sooners and the New York Buffalo Bills. Greg’s greatest treasure and accomplishment in his life was his family. He loved all the time that he got to spend with his kids and grandkids. He was always there when they needed him and would do anything for each of them. He was a friend to many and a joy to be around. He will be greatly missed by all this family and friends. Left to cherish his memory are his wife, Shannon Horner; step-mother, Carol Horner; children, Blake Shelton and wife Heather, Justin Taylor and wife Rachael, Britnie Horner, and Nicole Horner; sister, Richie Shelton and husband Mike, brothers, Kent Kelly and wife Stephanie and Derrick Kelly and wife Kassie; and grandchildren, Jacelyn, Jaxxon, Tucker, Rayleigh, Xander, Kash, and Beau. Greg is preceded in death by his father, Richard Horner, mother, Jean Smith, step-father, Danny Smith, fraternal grandparents, J. W. and Thelma Horner, and maternal grandparents, Jake, and Fern Langford. A funeral service to honor the life of Greg is set to begin at 2:00 P.M., on Thursday, January 13, 2022, at the First Baptist Church in Lindsay, Oklahoma with Lewis Cox officiating. He will be laid to his final rest at the Green Hill Cemetery in Lindsay, Oklahoma, following the service. Services are under the direction of Scott and Angel Wilbourn of Wilbourn Family Funeral Home in Lindsay, Oklahoma. Condolences may be made to the family online at www.wilbournfamilyfuneralhome.com

The family of Gregory Wayne Horner created this Life Tributes page to make it easy to share your memories.

Send flowers to the Horner family.