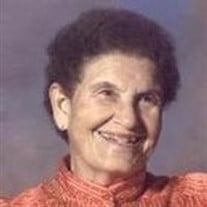 Elsie May Lacy, age 86, of Lindsay, OK, passed away on January 11, 2001 in Lindsay, OK. She was born on May 10, 1914 in Wapanucka, OK to Virgil W. Hook and Melvina Hook. Survivors include her children Lorita Arai, Don and his wife Jane (McElroy),... View Obituary & Service Information

The family of Elsie May Lacy created this Life Tributes page to make it easy to share your memories.

Send flowers to the Lacy family.