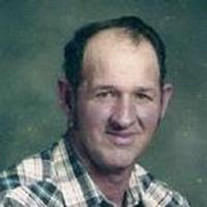 David Franklin Engle was born on October 17, 1933 in Seminole, Oklahoma to Raymond and Pearl Engle. He passed away on August 16, 2003 at Norman, Oklahoma at the age of 69 years 9 months and 20 days. He married his wife of 23 years, Virgie Allene Stephens, in Gainesville, Texas on August 14, 1980. David is preceded in death by his parents, Raymond and Pearl Engle; one brother: Edward Engle; one grandchild: Eric Tarver, and one great grandchild Charles Popplewell. David is survived by his wife Virgie of the home; and by his seven children. He has four daughters: Jan and husband Jerry Gharst of Longview, Texas, Ann and husband Joe Basinger of Garland, Texas, Diantha and husband Joey Fondo of Greenville, Florida, Sue and husband David Henderson of Lindsay, Oklahoma. David also has three sons: J. D. Engle of Gilmer, Texas, Howard and wife Loverta Tarver of Lindsay, Oklahoma, and Clayton and wife Gayla of Krebs, Oklahoma. Mr. Engle is also survived by 17 grandchildren and 16 great grandchildren. Casketbearers will include sons and grandsons; Clayton Tarver, Howard Tarver, Samuel Tarver, Chris Tarver, Charles Bagley, Justin Bagley, and Jeremy Bagley. Services will be held on Tuesday, August 19, 2003 at the Erin Springs Baptist Church at 2:00 p.m. with Rev. Bill Love officating. Mr. Engle will be laid to rest at the Erin Springs Cemetery. David was a wonderful and loving husband, father, and grandfather. He will be remembered with much love. He was always ready to help his family and neighbors in any way possible. His last few months were difficult but we are left with his legacy of love and caring. He is also survived by his faithful canine companion "Bogie". Services are under the direction of B. G. Boydston Funeral Home in Lindsay, Oklahoma.

David Franklin Engle was born on October 17, 1933 in Seminole, Oklahoma to Raymond and Pearl Engle. He passed away on August 16, 2003 at Norman, Oklahoma at the age of 69 years 9 months and 20 days. He married his wife of 23 years, Virgie Allene... View Obituary & Service Information

The family of David Franklin Engle created this Life Tributes page to make it easy to share your memories.

Send flowers to the Engle family.