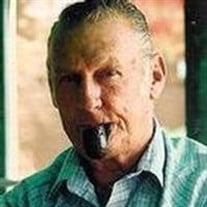 Carroll E. Kochert, age 79, passed away Saturday night, March 27, 2004, in Oklahoma City. He was born December 23, 1924, in Alamo, Texas, to Elmer and Anna Kockert. He served in the military for two years. He and his family moved to Lindsay in August 1965, where he owned and operated Carroll?s Auto Service for 30 years. Carroll enjoyed spending time with his family during the holidays and on camping trips. He loved driving his boat, often taking the children and grandchildren water skiing. He also enjoyed driving and working on the go-cart that he built for all the children and grandchildren, and himself of course. Carroll liked to be outside, gardening, mowing the lawn, or just sitting under a shade tree. He loved watching westerns on television, drinking coffee and telling stories to friends at the Ranch House. He always looked forward to reading stories and articles in the newspaper, but only after reading the comics. Mr. Kochert is survived by his wife, Helen and children, Mike and Sheryl Kochert, Tim Kochert, Jeff and Sherry Kochert, Janet and Robert Ferrell, Margaret Kochert and Kenny; four brothers, James Kochert, Ronald Kochert, Robert Kochert, and Elmer Kochert, Jr., three sisters, Marian Eastwood, Betty Kochert, and Dorothy Kochert; eleven grandchildren, four great grandchildren and many nieces and nephews. Carroll was preceded in death by both parents, one son, Carroll Kochert, Jr., a brother, Gerald Kochert and a sister, Christel Schoonover. Funeral services will be held on Tuesday, March 30, 2004 at St. Peter?s Catholic Church in Lindsay, Oklahoma, at 10:00 a.m., and interment will be at Green Hill Cemetery in Lindsay. Pallbearers include: Chris and Matt Crawford, Jarred and Nathan Scyrkels, Drew Kochert, and Chris and Nick Bennett. Funeral arrangements are under the direction of B.G. Boydston Funeral Home in Lindsay, Oklahoma.

Carroll E. Kochert, age 79, passed away Saturday night, March 27, 2004, in Oklahoma City. He was born December 23, 1924, in Alamo, Texas, to Elmer and Anna Kockert. He served in the military for two years. He and his family moved to Lindsay... View Obituary & Service Information

The family of Carroll E. Kochert created this Life Tributes page to make it easy to share your memories.

Send flowers to the Kochert family.