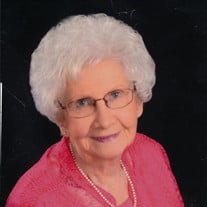 Carrie Dean (Deaton) Schwartz was born August 12, 1930, in Choctaw, Oklahoma. She passed from this life on June 6, 2022, in her home in Lindsay, Oklahoma, at the age of 91 years. Carrie’s life was a gift. First, Carrie was a gift to her parents, James William “Bill” and Minnie, and her four brothers Estle, Leroy, Floyd, and Walter. They all worked very hard to help her parents pay off the farm, and then they celebrated. From them, Carrie learned that by working together, they could accomplish one goal after another. All of the siblings and their parents were married for over fifty years. Second, Carrie was a gift to Merle. She met him when she was in the second grade while walking to school with her youngest brother, Walter. They would walk past the Schwartz’s home and since Merle went to the same school, they would walk together. Before long she and Merle were holding hands as they walked. After he got back from Korea, they got married on August 14, 1948. Carrie and Merle worked side-by-side with him raising vegetables (especially okra) while living in Moore, and then later she helped drive a tractor while farming wheat and alfalfa in Lindsay, and herding cattle. Third, Carrie was a gift to our family. She raised two kids while working on the farms but she also welcomed grandkids, great grandkids, friends, and anyone who didn’t have a family to celebrate holidays. She had a knack for making everyone feel special. Carrie often said that her favorite family member was the one she was with at the time. Most of all Carrie was a gift to the two churches that they attended. At Robinson Community Church, she played the piano and taught Sunday School. When they moved to Lindsay, Carrie continued to teach Sunday School at Erin Springs Baptist Church. So, Carrie probably taught Sunday School for around sixty years in total. When COVID-19 was active she missed seeing everyone very much. If you knew Carrie, she was a kind and loving person who always wanted to help people. We couldn’t have asked for a better mom, grandma, memaw, granny, gran, mamason, great-grandmother, wife, sister, aunt, or friend. We never heard her say a negative thing about anyone…ever! Thank you, Lord, for our special gift! -The Schwartz Family Left to cherish Carrie’s memory are her children, Kendal Schwartz and wife Judy of Kingfisher, Oklahoma, and Tawana Cheshier and husband Darrell of Ninnekah, Oklahoma; her extra special family members John, Dee, and Dustin Cheshier; grandchildren, Melissa Jenkins and husband Coby, Dustin Schwartz and wife Jamie, Andrew Cheshier, Kyla Cheshier and John Roach, great grandchildren, Braeden, Devin, Cade, Hunter, and Allie; and numerous nieces and nephews. She is preceded in death by her parents, Bill and Minnie Deaton, husband Merle Schwartz, brothers, Estle, Leroy, Floyd, and Walter Deaton, and sister, Ola Fay Deaton. A Funeral Service to honor the life of Carrie is set to begin Wednesday, June 8, 2022, at 10:00 A.M. at the Erin Springs Baptist Church in Erin Springs, Oklahoma. Following the service Carrie will be laid to her final rest at the Schwartz Cemetery, 89th and Anderson Road, in Oklahoma City, Oklahoma. Services are under the direction of Scott and Angel Wilbourn of Wilbourn Family Funeral Home in Lindsay, Oklahoma. Condolences may be made to the family online at www.wilbournfamilyfuneralhome.com.

The family of Mrs. Carrie Dean Schwartz created this Life Tributes page to make it easy to share your memories.

Send flowers to the Schwartz family.