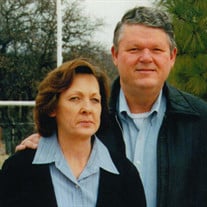 Carolyn Christine (Dutton) King was born on December 23, 1946, in Lindsay, Oklahoma, to Harvey Dutton and Lois Leotha (Anderson) Dutton. She passed from this life at her home in Lindsay, Oklahoma, surrounded by family on September 18, 2021, at the age of 74. Carolyn has been a resident of Lindsay for all of her life. She was a graduate of the Lindsay High School class of 1965. Carolyn married Ronald Childers and together they had three children, Roddy, Ronda, and Justin. After Ronald’s passing, she married Richard L. King in Chickasha, Oklahoma on September 16, 1994. They just celebrated twenty-seven years together. Carolyn was a wonderful housemaker. Cooking was one of her favorite things to do and she was great at it. Her greatest treasure in life was her family, everything that she did was for her husband, children, and grandchildren. She had a heart of gold and left memories that will last a lifetime. She is preceded in death by her first husband, Ronald Childers, parents, Harvey & Lois Dutton, brother, Allen Dutton, and sisters, Wanda Joyce and Rosamay Dutton. Left to Cherish her memory is her husband Richard King, children, Roddy Childers, Ronda Sanders, and Justin Childers, step-daughter, Tracey Flynn, sister, Louise Clark, brothers, Edmond Dutton and Carl Dutton, grandchildren, Jeremy, Devin, Destiny, Ridge, Kendra, Danny, Richie, Brandon, Clayton, Laci, Chaney, Brittany, Kyle, Tommy, Tré, Taylor, Bekka, Danno, and David, great grandchildren, Dawson, SheaLynn, Daxton, ShyLee, Rowdy, Kierstyn, Jeremiah, Ayden, Electra, Brooklynn, and Cannon, and numerous nieces and nephews. A graveside service is set to begin at 11:00 A.M. on Wednesday, September 22, 2021, at the Green Hill Cemetery in Lindsay, Oklahoma with Pastor Clay Hicks officiating. Services are under the direction of Scott and Angel Wilbourn of Wilbourn Family Funeral Home in Lindsay, Oklahoma. Condolences may be made to the family online at www.wilbournfamilyfuneralhome.com

The family of Carolyn Christine King created this Life Tributes page to make it easy to share your memories.

Send flowers to the King family.