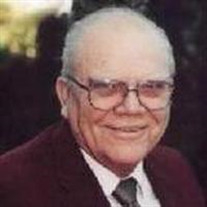 Calvin C. Bagwell, age 76, of Lindsay, OK, passed away on April 10, 2001 in Waco, TX. He was born on April 10, 1925 in Henrietta, TX to Joseph Jefferson Bagwell and Margaret Rebecca Hixon Bagwell. Calvin grew up in Erin Springs, OK and moved to Corpus Christie, TX during high school.He graduated from Texas A & M University in 1950 with a Bachelor of Science Degree in Petroleum Engineering. After working for Conoco for 25 years he became a Consulting Engineer and moved back to Lindsay in 1978. He continued working in the area until his retirement in 1993. He was a member of Texas A & M Alumni Association; Society of Petroleum Engineers; and American Institute of Metallurgical Engineers. Calvin served in the United States Marines during World War II. He served in the Philippines and in China. He enjoyed Texas A & M football and woodworking. Survivors include his wife, Betty Walker Bagwell of the home. They were married on January 14, 1952 in McAllen, TX. He has one son, David Bagwell and wife, Karen of Tulsa; and one daughter, Jeananne Madden and husband Kendall of Teague, TX. Grandchildren are Annamarie Madden and William Madden; Kendra Madden and Sarah Madden; Noah Jones and Matthew Jones. He is preceded in death by both parents and one brother, Joseph J.(Jeff) Bagwell, Jr. Arrangements have been made with B. G. Boydston Funeral Home in Lindsay, OK Services will be at the United Methodist Church in Lindsay on Friday, April 13, 2001 at 2:30 p.m. with Dr. Don Vanzant officiating.Burial will be in Green Hill Cemetery in Lindsay with Military Honors by the Lindsay American Legion Post # 23. Pallbearers will be Jess Storts, Clint Caswell, Bob Bridwell, Larry Milliken, Mike Milliken and Cameron Milliken.

The family of Calvin C. Bagwell created this Life Tributes page to make it easy to share your memories.

Send flowers to the Bagwell family.