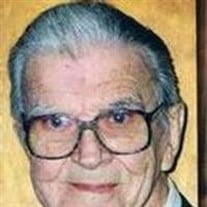 Connie Wilfred Henderson, age 88, of Tulsa passed away Monday, December 30, 2002 at Saint Johns Medical Center in Tulsa. He was born on December 12, 1914 to Monroe and Alta Severns Henderson. He was born in Bixby ,Oklahoma . He lived there until adulthood and then he moved to Sapulpa and later moved to Tulsa in 1949. Connie Wilfred was a member of the First Methodist Church in Tulsa. He was also a member of the Bixby Masonic Lodge # 359. His hobbies were all sports especially football. He was a very avid fan especially of O.U. He worked as a clerk for the Engineering department of Service Pipline division of Amoco production Co. He married Mildred E. Kendrick on June 5, 1943 at the First Methodist Church in Bixby ,Ok. He is survived by his wife Mildred of the home, sister-in-law Ruth Kendrick of Lindsay,Ok, Brother-in-law J.D. Kendrick and wife Carolyn of Grand Junction ,Co, and 9 nieces and nephews, Mona Thomas and husband Ralph of Lindsay, Ok, Gene Kendrick and wife Ellie of Gilbert,Az, Pat Kendrick of Sapulpa ,Ok, Ann Bowen and husband Jess of Lindsay,Ok, Mike Kendrick and wife Dr.Mary Sue of Lindsay,Ok, Joe Kendrick and wife Kerry of Grand Junction,Co, Pam Smith and husband Les of Grand Junction,Co, Dennis Kendrick and wife Denice of Columbia,SC,and Barbara Shultz and husband Bob of San Antonio,Tx with 11 grand nieces and nephews. He is proceded in death by his parents Monroe and Alta Severns Henderson and brother Ralph Henderson and sister-in-law Janice Henderson. Services will be Friday, January 3, 2003 at 2:00p.m. at the United MethodistChurch in Lindsay, Ok with Rev. George Lupton officiating. Interment will be at Green Hill Cemetery, Lindsay. Memorial may be viewed online at www.boydstonfuneralhome.com Arrangements are with B. G. Boydston Funeral Home in Lindsay.

Connie Wilfred Henderson, age 88, of Tulsa passed away Monday, December 30, 2002 at Saint Johns Medical Center in Tulsa. He was born on December 12, 1914 to Monroe and Alta Severns Henderson. He was born in Bixby ,Oklahoma . He lived there until... View Obituary & Service Information

The family of C. W. Henderson created this Life Tributes page to make it easy to share your memories.

Send flowers to the Henderson family.