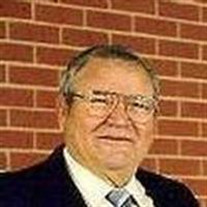 Blair Adkins passed away at the age of 73 on October 13, 2004. He was born to Arthur and Katie Adkins in Foster, Oklahoma on March 11, 1931. He was raised in the Foster and Marlow area. Blair married Frankie Dean Mercer in Wichita Falls, Texas on April 22, 1950. He enjoyed his work as an oilfield consultant and spending time with family and friends. He was a member of the Hughes Baptist church. Blair is preceded in death by his parents, two brothers, Louis and Wilford Adkins, one sister, Loretha Armstrong and one grandson, Brandon Dale Blankenship. He is survived by his daughter, Terri Lee Cooper and husband Keith of Lindsay, and his son, Russell Blair Adkins and wife Karen of Lindsay. He is also survived by one sister, Lida Price of Portersville, CA, and two brothers, Clyde Adkins and Reba of Marlow, Kenneth Adkins and Pauletta of Duncan. He also leaves behind his grandchildren and great-grandchildren, Michelle Leigh Acuna and Fernando of Oklahoma City, Thomas Dustin Blankenship and wife, Erin of Lindsay, Misty Dawn Fuller and Byron of Lindsay, Mandi Lee Robbins and Matt of Lindsay, Jeremy Taylor Adkins, of Lindsay, Nathan Dale Blankenship and Adena of Oklahoma City, Curtis Blair Adkins of Lindsay, Daniel Wayne Cooper of Lindsay, Allison Leigh and Brookelyn Dawn Acuna of Oklahoma City, Beau Dustin Blankenship of Lindsay, Makayla Rae and Brennan Saige Fuller of Lindsay, Quinton Cole and Kaiton Blair Robbbins, of Lindsay, Johnston Taylor Adkins of Lindsay, Shelby Danielle, Makala Lee, and Kurtis Michael Beasley of Oklahoma City. Services for Blair will be at the Calvary Baptist Church, Lindsay, Oklahoma on Friday, October 15, 2004 at 2:00 p.m. Interment will be at Green Hill cemetery. In honor of his military experience with the National Guard, the Lindsay American Legion, Ball Smith, Post 23, will present the American flag, conduct a 21 gun salute and play "Taps" Funeral arrangements are under the direction of B. G. Boydston Funeral Home, Lindsay, Oklahoma. Condolences may be sent to the Adkins family online at www.boydstonfuneralhome.com

Blair Adkins passed away at the age of 73 on October 13, 2004. He was born to Arthur and Katie Adkins in Foster, Oklahoma on March 11, 1931. He was raised in the Foster and Marlow area. Blair married Frankie Dean Mercer in Wichita Falls, Texas... View Obituary & Service Information

The family of Blair Pace Adkins created this Life Tributes page to make it easy to share your memories.

Send flowers to the Adkins family.