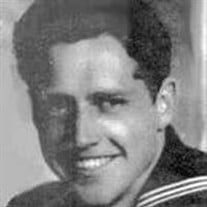 Bill Wynn, Sr., age 77, passed away on November 11, 2001 in Norman, OK. He was born on Jan. 5, 1924 in Lindsay to Oscar William Wynn and Alice Allie Anderson Collum Wynn. Bill lived most of his life in Lindsay except for about twelve years in the Enos-Texhoma area. He served four years in the United States Navy as a Seabee. He was a retired truck driver and construction worker. Bill was a member of the Lindsay Full Gospel Church and Enos House of Prayers in Enos, OK. He enjoyed watching westerns on TV; playing and teasing his great grandchildren and being with his own children. Survivors he leaves behind are children, Michael V. Wynn and wife Linda of Glen Avon, CA; Bill Wynn, Jr. and wife, Linda of Lindsay; Linda Gandy of Lindsay; and Ronnie G. Wynn and wife Kay of Lindsay. Eleven grandchildren and eleven great grandchildren. He is also survived by one sister, Bobbie D. Henson of Maysville, OK. He is preceded in death by his wife Alberta Jean Sanders Wynn on Nov. 25, 2000. They were married on May 14, 1947 in Bakersfield, CA.He is also preceded in death by twin daughters; by both parents and one brother and two sisters, Gilford Collum, Pansy Teague, and Lillis Mize. He will be greatly missed by his loving and caring family and the many friends he made along his pathway in life. Funeral arrangements are with B. G. Boydston Funeral Home in Lindsay. Services will be in the Boydston Chapel on Thursday, Nov. 15, 2001 at 2:00 p.m. with Rev. Bobby Hearon and Rev. Billie Davenport officiating. Burial will be in Green Hill Cemetery with Military Honors by Lindsay American Legion Post # 23. Pallbearers will be Slim Hearon, Robert Harrell, Junior Hearon, Troy Henson, Jimmy Henson and Bill Harrell. Honorary pallbearers will be Bill Henry, Cecil Sanders, Bob Faulkenberry and Tommy Gray.

Bill Wynn, Sr., age 77, passed away on November 11, 2001 in Norman, OK. He was born on Jan. 5, 1924 in Lindsay to Oscar William Wynn and Alice Allie Anderson Collum Wynn. Bill lived most of his life in Lindsay except for about twelve years in... View Obituary & Service Information

The family of Bill Wynn, Sr. created this Life Tributes page to make it easy to share your memories.

Send flowers to the Wynn, family.