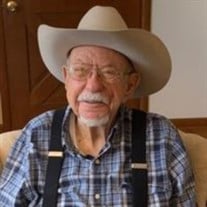 Bill H. Love, of Lindsay, Oklahoma, departed to his heavenly home on Tuesday, March 2, 2021, at the age of 89. Bill was born May 10, 1931 to Bertie Hershel & Ruby Irene Love in Oklahoma City, Oklahoma and spent most of his younger years in Fredrick, Oklahoma. Bill was a beloved brother, husband, father, grandfather, pastor and friend. Those who knew Bill knew how much he loved people, never meet a stranger and always had a joke or story to tell. Bill left this earth shortly before tax season to get the IRS off his back, so if you left him a voice mail, sorry, he won’t be able to call you back. All joking aside, Bill was generous to his family and friends and if anyone needed it, he would have gladly given you the shirt off his back. Bill was called into the ministry in his early 20’s but preached his first sermon at the age of 9 holding a funeral for a cat. Bill was ordained as a pastor in 1955 and pastored his first church in Keichi, Oklahoma. In 1966, Bill and Thelma were appointed as international missionaries to Malaysia and Singapore and served from 1967-1982. During Bill’s time on the mission field, he started churches and oversaw the construction of multiple church buildings, trained and mentored individuals to become pastors and leaders in ministry. He also served Vietnamese refugees in the refugee camp in Kuala Lumpur, Malaysia, by teaching them English through Bible studies and helping them find sponsors for a better life. After serving on the mission field, Bill & Thelma returned to their first calling to serve the local church. In the Spring of 1985, they moved to Lindsay, Oklahoma to become the pastors of the Erin Springs Baptist Church where they served for 12 years. After retiring at the age of 65, Bill could not shake his calling and went back to pastoring at Cox City Baptist Church where he served for 20 more years. When asked where he got his strength to continue preaching, he said the Lord had put fire in his bones. When Bill moved to Lindsay, he never dreamed how much he would fall in love with the town and people of Lindsay. He considered Lindsay his home and loved his multiple daily visits to Gas-n-Go to have coffee and shoot the bull with his buddies. To many, he was known as the town preacher, but when he told it, he was the town bootlegger, but we all know he was just “pulling their leg”. Thank you, Lindsay for accepting and loving Bill for who he was, he loved each one of you. A special thank you to the Lindsey EMT’s and Fire Department for all your assistance. Bill is survived by his wife Thelma Jo Love (AKA Precious the wrestler), his sister Alice Joyce Gilliland, his children, Deborah Love Bradshaw, Mark Love, Sara Bratcher and her husband Kevin, Grandchildren, Curtis & Clayton Bradshaw, Kayla Bratcher, Shelby Uber, her husband Connor and multiple nieces and nephews. He was loved by many for the difference he made in their lives and left a tremendous legacy for his family. His presence will be missed by all. Bill would like to leave you a little advice, “Smile, and have a great day!” If you would like to make a donation in honor of Bill, please donate to The Boys Ranch Town in Edmond, Oklahoma. Please make sure to designate the donation in memory of Bill H. Love. https://www.obhc.org/about/campuses/brt/. A funeral service to honor the life of Bro. Bill is set to begin at 2:00 P.M. on Monday March 8, 2021, at the Erin Springs Baptist Church in Erin Springs, Oklahoma. He will be laid to his final rest following the service at the Green Hill Cemetery in Lindsay, Oklahoma. Bro. Bill's service will be live-streamed on the Wilbourn Family Funeral Home Facebook page. Services are under the direction of Scott and Angel Wilbourn of Wilbourn Family Funeral Home in Lindsay, Oklahoma. Condolences may be made to the family online at www.boydstonfuneralhome.com

Bill H. Love, of Lindsay, Oklahoma, departed to his heavenly home on Tuesday, March 2, 2021, at the age of 89. Bill was born May 10, 1931 to Bertie Hershel & Ruby Irene Love in Oklahoma City, Oklahoma and spent most of his younger years in Fredrick,... View Obituary & Service Information

The family of Bill Love created this Life Tributes page to make it easy to share your memories.

Bill H. Love, of Lindsay, Oklahoma, departed to his heavenly...

Send flowers to the Love family.