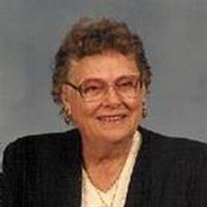 Bertha M. "Bertie" Adams passed away on September 8, 2004 at the age of 88. She was born Bertha May Beattie on September 4, 1916, in Sapulpa, Oklahoma. Her parents were Fred Hale and Grace Irene Shirley Beattie. Bertie married Clyde Adams on February 5, 1937 in Weleetka, Oklahoma. Together they moved to Lindsay, Oklahoma in 1949 to make this their home and raise their three daughters. While Clyde worked outside the home as a District Gauger for Sun Oil Company for 47 years, Bertie took care of the home and children. She was a Girl Scout Leader, taught Sunday school for many years, was the neighborhood flower coordinator and attended as many of the church activities as possible. Bertie was a member of the Calvary Baptist Church in Lindsay, Oklahoma. She enjoyed reading, working crossword puzzles, jigsaw puzzles, but most of all she loved spending time with her family and neighbors and with her grandchildren and great-grandchildren. Bertie is preceded in death by her parents, Fred and Grace Irene Beattie, three brothers, and two sisters. She is survived by her husband, Clyde Adams, her daughters Clyda Berdell and her husband, Jim Mihlhauser of Austin, Texas, Louise and her husband, Bruce Bullock of Columbia Missouri, Gloria Jean and her husband, Ed Wendling of Blanchard, Oklahoma, one sister, Irene Johnson, Denison, Texas. Bertie is also survived by eight grandchildren, Andrea Mihlhauser, Amy Mihlhauser, Athena Stolzer, Angela Splan, Roland Bullock, Tim Stucks, Travis Stucks, Amanda Taylor, and fifteen great-grandchildren. Services for Bertie will be held at the Calvary Baptist Church, Lindsay, Oklahoma at 10:00 a.m. She will be laid to rest at the Weleetka Cemetery, Weleetka, Oklahoma. Funeral services are under the direction of B. G. Boydston Funeral Home of Lindsay, Oklahoma. Condolences may be sent to the Adams family at www.boydstonfuneralhome.com.

Bertha M. "Bertie" Adams passed away on September 8, 2004 at the age of 88. She was born Bertha May Beattie on September 4, 1916, in Sapulpa, Oklahoma. Her parents were Fred Hale and Grace Irene Shirley Beattie. Bertie married Clyde Adams... View Obituary & Service Information

The family of Bertha M. Adams created this Life Tributes page to make it easy to share your memories.

Send flowers to the Adams family.