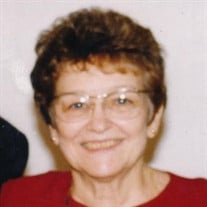 Audra Evelyn (Parker) Dennis passed from this life on October 25, 2021, in Norman, Oklahoma. She was born eleven miles northwest of Lindsay, Oklahoma, on February 13, 1930, to Francis William Parker and Dora (Norton) Parker. Audra married Charley Dennis at the First Baptist Church in Lindsay, Oklahoma, on August 27, 1949. They celebrated thirty-seven years together before his passing in November of 1986. She spent almost all of her life in and around Lindsay, Oklahoma prior to 2013 when she moved to reside in assisted living facilities in Norman, Oklahoma. Audra was an administrative assistant at REC, and other various businesses in Lindsay. She taught Sunday school over fifty years at the First Baptist Church in Lindsay, Oklahoma, and was an excellent self-taught seamstress. She is preceded in death by her parents, Francis and Dora Parker, her husband, Charley Dennis, and two brothers, Ollen Parker and Lloyd Parker. Left to cherish the memory of Audra are her sons, Jimmie Dale Dennis of Tulsa, Oklahoma, Robert Edward Dennis of Norman, Oklahoma, and Charles Dwayne Dennis of Lindsay, Oklahoma; grandchildren, Jason Fugate, Angela Fugate, Tyller Garza, Mathew Dennis, Daniel Dennis, Bethany (Dennis) Franklin, Joshua Dennis, Jacob Dennis, and Rachel Dennis. A funeral service to honor the life of Audra is set to begin at 10:30 A.M. on Thursday, October 28, 2021, at the First Baptist Church in Lindsay, Oklahoma. She will be laid to her final rest at Erin Springs Cemetery following the service. Services are under the direction of Scott and Angel Wilbourn of Wilbourn Family Funeral Home in Lindsay, Oklahoma. Condolences may be made to the family online at www.wilbournfamilyfuneralhome.com.

The family of Audra Evelyn Dennis created this Life Tributes page to make it easy to share your memories.

Audra Evelyn (Parker) Dennis passed from this life on October...

Send flowers to the Dennis family.