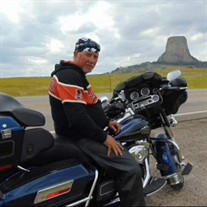 Anthony “Tony” Dewayne Massey, after a long and hard-fought battle with cancer, passed away on April 10, 2022, in Oklahoma City, Oklahoma, at the age of 60. On July 30, 1961, Tony was born to Roy Lee Massey and Pamela Sue (Redman) Massey, in Malden, Missouri. Tony grew up in Malden, Missouri, but spend more than half of his life as a resident of Oklahoma. He has been residing in Oklahoma City, Oklahoma, for the last twenty-two years. Tony was a proud veteran of the United States Navy. He was a member of the Doghouse family. By trade, Tony was a welder in the oilfield for many years. In 2008, he was promoted to shop foreman at his company, UE Manufacturing, and spent the last fourteen years being a great asset and excelling in that position. In March of 2018, Tony married Lynnette “Lynn” Shown in the living room of their home in Oklahoma City, Oklahoma. They had just celebrated their fourth wedding anniversary. Tony was a go-getter and an enthusiastic person. He saw the joy in the little things and believed in living life to the fullest. Tony found peace and adventure on the back of his motorcycle. He was interested in guns and anything related to them. Tony was an avid sports lover. It didn’t matter the sport, he could proudly and with great excitement get into any game, at any time. He was a fan of the St. Louis Cardinals baseball team, the Arizona Cardinals football team, and the OU Sooners football team. Tony loved the outdoors and took many camping trips through the years. Tony was known to be an excellent cook, griller, and smoker. He cooked for many family and friend gatherings and his family said he made “the best ribs ever!” Of all the things that Tony found enjoyment in, his family was the most important. The time that he was able to share with them was his greatest treasure. He was one-of-kind and a friend that anyone would wish they could have. Those who knew Tony; knew that he regarded friends as part of his family. His absence leaves a huge hole in the hearts of his family and friends, but his legacy lives on in each of them. He will be greatly missed by all who knew him. Left to cherish Tony’s memory are his wife, Lynn Massey of Oklahoma City, Oklahoma, father, Roy Massey, and wife Pat of Checotah, Oklahoma, mother, Pam Massey of Steeleville, Illinois, son, Michael Massey of Lowell, Arkansas, daughters, Toni (Massey) French and husband Drew of Hayward, Wisconsin, Morgan Cusack of Moore, Oklahoma, Corie Shown of Tulsa, Oklahoma, Sarah Wilbourn and husband Ben of Lindsay, Oklahoma, brothers, Rick Massey of Parma, Missouri, Tim Massey of Steeleville, Illinois, sisters, Misty and husband Mike of Steeleville, Illinois, Dina and husband Randy of Steeleville, Illinois, and Sam Loesing of Sparta, Illinois, and grandchildren, Liam, Addy, Livi, Nora, Brooklynn, Georjah, and Rosie. A memorial service to celebrate and honor the life of Tony is set to begin at 2:00 P.M. on Monday, April 18, 2022, at the Mayfair Event Center located at 3200 NW 48th Street, Oklahoma City, Oklahoma. Services are under the direction of Scott and Angel Wilbourn of Wilbourn Family Funeral Home in Lindsay, Oklahoma. Condolences may be made to the family online at www.wilbournfamilyfuneralhome.com

The family of Anthony "Tony" Dewayne Massey created this Life Tributes page to make it easy to share your memories.

Anthony “Tony” Dewayne Massey, after a long and hard-fought battle...

Send flowers to the Massey family.