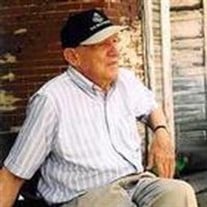 W. D. "Dub" Stephens, 86, passed away on August 25, 2004, at the Lindsay Hospital. Dub was born on June 26, 1918, in Winthrop, Arkansas to William Delno Stephens, Sr. and Ada Sessions Stephens. He moved to Lindsay, Oklahoma in 1927, and managed the Ben Franklin Store after high school. He attended Oklahoma University and was a graduate of a Business School in Oklahoma City, Oklahoma. Dub and Leta were married in Lindsay, Oklahoma on March 28, 1941 and made Lindsay their home. He was a business man in Lindsay for 66 years. He worked for Gulf and Cities Service oil companies as a Jobber, he was a former Councilman and Mayor of the City of Lindsay. Mr. Stephens also proudly served his country during WWII as a Warrant Officer and instructor in aircraft navigation. Dub was a member of the United Methodist Church. Dub lived an active life, he belonged to the Masons, Rotary, Chamber of Commerce, Chairman of The Board of the Lindsay Hospital Foundation, and Garvin County Excise Board for 23 years, but he still found time to enjoy fishing, being a coffee shop patron, being a Sooner fan of O.U., and a Leopard fan; he loved sports and especially the young athletes who played them. Dub was preceded in death by his parents, W. D. Stephens, Sr., and Ada Sessions Stephens and his beloved wife Leta and five siblings; Flenoia D. Stephens, Mary Barefoot, Harold Stephens, Corrine Martin and Terrell Stephens. He is survived by his three sons; Robert Gary and Lurinda Stephens, David Russell Stephens and Kay Heins, and Joe Brent and Tess Stephens. He was blessed by five grandchildren who will miss him; Trent D. Stephens, Skyler W. Stephens, Tammy M. Knight, Shawn K. Stephens, Lisa J. Stephens; and four great grandchildren, Olivia Kate Stephens, Brett Knight, Bethany Knight and Bailey Knight. Dub was loved by so many and will be missed by a host of nieces and nephews and good friends, including his pals at the donut shop and his companions at the Senior Citizens. He loved mentoring children, especially, Robbie and Clinton Gibson. He had special memories for the love, care and devotion of Monica, Robbie and Clinton Gibson, and Pat Sims. Services for W. D. Stephens will be Saturday, August 28, 2004 at 2:00 p.m. at the United Methodist Church, Lindsay, Oklahoma. He will be laid to rest at the Green Hill Cemetery beside Leta Jones Stephens. Funeral arrangements are under the direction of B. G. Boydston Funeral Home, Lindsay, Oklahoma. Condolences may be sent to the Stephens family online at www.boydstonfuneralhome.com.

The family of William D. Stephens created this Life Tributes page to make it easy to share your memories.

Send flowers to the Stephens family.