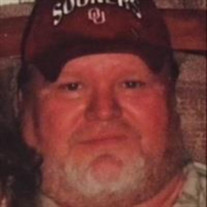 Curtis was born September 18, 1957 in Pauls Valley, Oklahoma. The eldest of 6 children to Billy Joe Self and Ramona (Brooks) Self. Surrounded by family after a courageous battle with Bulbar Onset ALS. Curtis was called from this earthly life to the arms of Our Mighty Savior, Jesus Christ on February 12, 2021. He lived in many places throughout Oklahoma but always called Velma home. Curtis graduated high school at Velma-Alma. Curtis enlisted in the Navy straight out of high school, with an Honorable Discharge. Graduated Draughon School of business. Curtis also acquired a degree in broadcasting where he worked for a while as a disc jockey in Amarillo, Texas and Woodward Oklahoma. Curtis worked in the oilfields of Oklahoma, Texas and California. In Curtis’s final years he made his living as a professional truck driver. Curtis will be remembered as a Great Son, Brother, Uncle and Friend to many. Curtis was always there to help. Curtis’s quick wit and humor will be missed. He could always bring light to a dark situation and clear focus on a tough situation. Curtis will be missed and remembered by many. Curtis is preceded by his Dad, Billy Joe Self and a solid Brother and Friend Albert (Bud) Eugene Summers and Brother in Law, Carl Vestle. Curtis is Survived by his mother Ramona. Sister, Carol Miller and Husband Mike. Brother, Mike Self and Wife Shawna. Sister, Shelly Self and Husband Sam Robinson. Sister, Stacy Duty and Husband Dorion. Brother, Forest (Skeet) Self and Wife Dawn. Curtis had many Nieces and Nephews. Alecia, Aj, Sammy, Levi, Shalynn, Billy, Tamria, Edge, Kryston, Canyon, Karissa, Brandon, Tanner, Brittany, Daniel, Colt, Kylie and Abigail. Great Nieces and Nephews Sydney, Mason, Aquira, Bryce, Ariana, Katalina, Eli, Luke, Rayden, Carlie, Reese, Justice, Eternity, Abraham, Austin, Emma and Riley. Great, Great Nieces and Nephews Kayden, Maddison, London, Reagan, Khyra, Willie, Braxton, Josiah, Layla, Clayton, Annabelle and Zoah. A graveside service will be at the Purdy Cemetery on February 13, 2021 at 3:00 P.M. Services are under the direction of Scott and Angel Wilbourn of Wilbourn Family Funeral Home in Lindsay, Oklahoma.

Curtis was born September 18, 1957 in Pauls Valley, Oklahoma. The eldest of 6 children to Billy Joe Self and Ramona (Brooks) Self. Surrounded by family after a courageous battle with Bulbar Onset ALS. Curtis was called from this earthly life... View Obituary & Service Information

The family of William Curtis Self created this Life Tributes page to make it easy to share your memories.

Send flowers to the Self family.