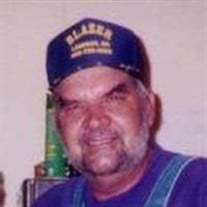 William "Joe" Gandy, age 53, of Lindsay, Oklahoma, passed away December 24, 2000, in Chickasha, Oklahoma. He was born at Woody Chapel near Purcell on May 18, 1947, to William Perry Gandy and Lura Beatrice Williams Gandy. He has lived in the Lindsay area for thirty years and was a member of the Pentecostal Faith. Joe also served in the United States Army during the Vietnam War. He was employed as an oilfield worker and enjoyed spending time with his family and friends, repairing toy cars for his grandsons and fishing. Joe was a wonderful man and will be dearly missed by all his family and friends. He is survived by his wife, Linda Sue Wynn Gandy, of the home. They were married at the Pentecostal Church in Purcell, Oklahoma on November 20, 1968. He leaves behind his mother, Lura Beatrice Gandy; daughters, QuaTonya M. Anderson and her husband, Jim, of Dyess AFB, Texas, and Tammy Sue Miller and her husband, Randall, of Alex, Oklahoma; three grandsons, Justin C. Anderson, Austin K. Miller and Curtis T. Miller. Surviving brothers and sisters are Leretia and Marion Henderson, Chris Gandy, and Shonda and Melvin Powell, all of Maysville, OK, and Trena and Tommy White of Lindsay, OK. Preceding him in death are his father, W. P. Gandy and a baby brother. Services will be held in the Assembly Church of God in Maysville, OK, on Thursday, December 28, 2000, at 2:00 p.m. with Rev. Billy Davenport officiating. Military honors will be given by the Lindsay American Legion Post #23. Pallbearers include Cory Newby, Roger Murphy, Russell Henderson, Tommy White, James Gandy and Jimmy Henson. Honorary pallbearers are Troy Henson, Terry Jarman, Duane Webb, Vernon Bone, and Chester Dean. Interment will follow in Green Hill Cemetery in Lindsay, OK. Arrangements are with B. G. Boydston Funeral Home in Lindsay.

William "Joe" Gandy, age 53, of Lindsay, Oklahoma, passed away December 24, 2000, in Chickasha, Oklahoma. He was born at Woody Chapel near Purcell on May 18, 1947, to William Perry Gandy and Lura Beatrice Williams Gandy. He has lived in the... View Obituary & Service Information

The family of William Joe Gandy created this Life Tributes page to make it easy to share your memories.

Send flowers to the Gandy family.