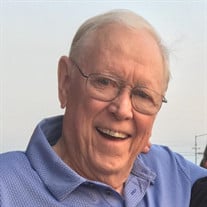 William “Bill” Edward Martin, 86, of Lindsay, Oklahoma was born on February 28th, 1935, in Lyons, Kansas, to William F. and Golda (Ratliff) Martin. He passed away on October 26th, 2021, in Chickasha, Oklahoma. Bill graduated from Lindsay High School with the class of 1953. He later attended Cameron University, then graduated from the University of Oklahoma with a Bachelor's degree in Geology. After earning his degree, Bill worked for Hughes Engineering in Fort Worth, Texas, for two years. He also served in the army for a time. Afterwards, he worked for Core Lab in Oklahoma City, Oklahoma, where he traveled abroad to North Africa, Tunisia, and other countries. After returning to the states, he married his wife Joan on January 5th, 1967. They lived together in Edmond, Oklahoma, until 1971, when they moved to Lindsay, Oklahoma, with their two children. Bill worked with his father-in-law at Goodner’s Grocery store. He later purchased and owned the store until his retirement in 2001. Bill cared for everyone that he met, and was incredibly outgoing in not only his social life, but also his community. He was a member of the Baptist Church in Lindsay, Oklahoma. He served time on the Lindsay City Council, and was a member of the Lindsay Masonic Lodge No. 248 for sixty-two years. He is preceded in death by his wife, Joan, his parents William F. and Golda, his sister Colleen Baker, and his nephew Brian Baker. Bill is survived by daughter Angela and husband Chris Young of Lone Grove, Oklahoma; son Kevan Martin of New Brighton, Pennsylvania; granddaughter Sara Young of Stillwater, Oklahoma; niece Leschen Nye of Lindsay, Oklahoma; and special friend Mary Tuck of Chickasha, Oklahoma. A graveside funeral service to honor the life of Bill is set to begin at 1:00 P.M. on Friday, October 29, 2021, at the Green Hill Cemetery in Lindsay, Oklahoma. Services are under the direction of Scott and Angel Wilbourn of Wilbourn Family Funeral Home, Lindsay, Oklahoma. Condolences may be made to the family online at www.wilbournfamilyfuneralhome.com.

The family of William "Bill" Edward Martin created this Life Tributes page to make it easy to share your memories.