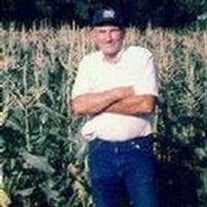 Will Jewell "Dub" Chambers, age 73, of Lindsay, OK passed away in Chickasha, Oklahoma on February 14, 2001. He was born in Indianola, OK on August 9, 1927 to George Washington Chambers and Laura Ellen Lyles Chambers. He was married on March... View Obituary & Service Information

The family of Will Jewell Chambers created this Life Tributes page to make it easy to share your memories.

Will Jewell &quot;Dub&quot; Chambers, age 73, of Lindsay, OK passed away...

Send flowers to the Chambers family.