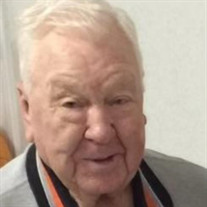 Wilburn “Red” Washington Hightower was born on December 16, 1928, in Lindsay, Oklahoma, to Porter E. Hightower and Laura Mae (Wilkerson) Hightower. He was called home to be with his Lord and Savior on September 21, 2021, in Sulphur, Oklahoma, at the age of 92. Red has been a resident of Lindsay for most of his life. He was a devout Christian and member of the Church of Christ. He was also a member of the American Legion and Hole in One Club. In his younger years he played baseball and football for the Lindsay Leopards. After school he would drive the bus route before returning to school for football practice. Red proudly served in the United States Army during the Korean Conflict. Red married Voncille (Jones) Hightower in Pauls Valley, Oklahoma, on December 15, 1978. Together they had forty-two years of life and love. Red spent his working life as a truck driver in the oilfield. After his retirement he became a bus driver for Lindsay Public Schools until he was 85. Red never missed a Lindsay Leopards ball game. He was a Number One Fan for many years and loved to support the kids and cheer them on. He was an avid golfer and played as often as he could as long as he was able. Red was a kind soul that loved helping others. He was a loving and caring husband, father, and grandfather. Red is preceded in death by his parents, Porter and Laura Hightower, his brother, James Hightower, and his great grandchildren, Christian and Destiny Li and Keagan Yancy. Left to cherish his memory is his wife, Voncille Hightower, children, Virginia Towery of Newcastle, Oklahoma, Vickie Scruggs and husband Robert of Mannford, Oklahoma, Becky Morgan and husband Darrell of Lawton, Oklahoma, Gary Jones of Oklahoma City, Oklahoma, Keith Jones and wife Barbie of Oklahoma City, Oklahoma, Jeff Mallory of Lindsay, Oklahoma, and Michelle Hillin and husband John of Pauls Valley, Oklahoma, two sisters, Wanda Drake of Wichita, Kansas, and Jeanne Jantz of Bristow, Oklahoma, eleven grandchildren, and ten great grandchildren. A funeral service to honor the life of Red is set to begin at 10:30 A.M. on Friday, September 24, 2021, at the Lindsay Church of Christ with Brant Stubblefield officiating. He will be laid to his final rest at Green Hill Cemetery following the service. Services are under the direction of Scott and Angel Wilbourn of Wilbourn Family Funeral Home in Lindsay, Oklahoma. Condolences may be made to the family online at www.wilbournfamilyfuneralhome.com.

Wilburn &#8220;Red&#8221; Washington Hightower was born on December 16, 1928, in Lindsay, Oklahoma, to Porter E. Hightower and Laura Mae (Wilkerson) Hightower. He was called home to be with his Lord and Savior on September 21, 2021, in Sulphur,... View Obituary & Service Information

The family of Wilburn "Red" Washington Hightower created this Life Tributes page to make it easy to share your memories.

Send flowers to the Hightower family.