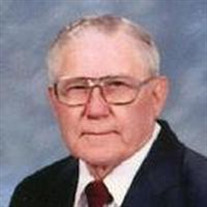 W.M. (Dub) Stephens, age 75, of Lindsay, passed away Wednesday, March 26, 2003 at Norman Regional Hospital. He was born on October 9, 1927 in Payne, Oklahoma to Wilburn Stephens and Minnie Mae (McWater) Stephens. Dub resided in the Lindsay area most of his life. He worked in the oilfield, raised cattle and farmed. He retired from REC. He was a member of the Payne Baptist Church. After he retired from the cattle business, Dub spent his spare time watching his nieces and nephews play sports. Dub is survived by his wife, Fannie Lou (Worley) Stephens, of the home. They were married on August 26, 1950 at the Church of Christ in Pauls Valley. Brother, Bill Stephens and wife Shirley of Cromwell, OK and Sister Lueva Norman of Stanton, TX, and numerous nieces and nephews. He is preceded in death by both parents. Services will be held on Friday, March 28, 2003, at 2:00 p.m., at Erin Springs Baptist Church, with Rev. Bill Love officiating. Interment will be at Green Hill Cemetery. Pallbearers are Olen Gaither, Freddie Gaither, Tony Stephens, Loyal Benton, Earl Dacus, and Don Scott. Honorary pallbearers are Bill Gordon, Terry Stephens, Bill Wilkes, Dorwin Dockery, Don Knapp, David Knapp and REC Employees.

The family of W. M. Stephens created this Life Tributes page to make it easy to share your memories.

Send flowers to the Stephens family.