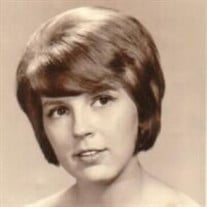 Vicky Lynn (Wood) Box was born July 3, 1948, in Batesville, Mississippi. She passed from this life Wednesday, February 24, 2021, at the age of 72, in Norman, Oklahoma. Vicky was born to Sidney James Wood and Cleta Juanita (McNutt) Wood. Even though Vicky wasn’t born in Oklahoma, she lived the majority of her life in Lindsay. Her dad worked on the pipeline and she traveled with him wherever he would go for a job. Vicky married Ronald Box, May 25, 1967, in Lindsay, Oklahoma. Together they had two children, Stevie and Jamie and raised them in Lindsay. Vicky did a variety of things in her lifetime, but the most important roles she had was being a wife, mother, and Nanna. She was very devoted to her family. Vicky was said to be an avid collector. Some of her collections included coins, Barbie dolls, antiques, and Elvis memorabilia. She, also, enjoyed dancing, listening to Classical and The Beatles’ music, and watching old black and white films. Vicky had a deep affection for animals, too. Left to cherish Vicky’s memory are her husband Ronald of the home, her son Ronald “Stevie” Stephen Box, II, of Lindsay, Oklahoma; daughter Jamie Michelle King and husband Derek of Lindsay; grandchildren Dylan James Stephen Smith of Midland, Texas, and Cassondra Lynn Smith of Lindsay, Oklahoma; three nephews James Michael Wood, Jr., Aubrey Gregg Wood of Lindsay and Colton Drennan of Edmond, Oklahoma; two nieces Michaela Kline of Missouri and Lyndsi Jae Drennan of Lindsay, Oklahoma; a brother-in-law David Lee Box of Lindsay, and a sister-in-law Janice Claudine Drennan, plus a host of other relatives and friends. Vicky was preceded in death by her parents and brother James Michael Wood. A funeral service to honor the life of Vicky is set to begin at 2:00 P.M., Tuesday, March 2, 2021, at the Wilbourn Family Funeral Home Chapel, 308 SW 3rd Street, in Lindsay, Oklahoma. Funeral services are under the direction of Scott and Angel Wilbourn of Wilbourn Family Funeral Home in Lindsay, Oklahoma. Condolences may be made to the family at www.boydstonfuneralhome.com.

Vicky Lynn (Wood) Box was born July 3, 1948, in Batesville, Mississippi. She passed from this life Wednesday, February 24, 2021, at the age of 72, in Norman, Oklahoma. Vicky was born to Sidney James Wood and Cleta Juanita (McNutt) Wood. Even... View Obituary & Service Information

The family of Vicky Lynn Box created this Life Tributes page to make it easy to share your memories.

Send flowers to the Box family.