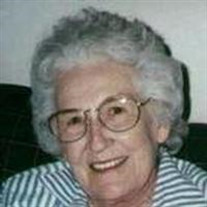 Vandetta Wayne Boyer beloved wife, mother, grandmother and friend passed away in the presence of family on December 2, 2001. Vandetta was born in Cleveland, OK on November 18, 1921 to Forest and Margaret Hopkins. She graduated from Cleveland High School and later married Lynn Boyer who preceded her in death in 1965. Vandetta selflessly gave of herself to family and friends. She centered her life around her children and grandchildren, and was actively involved as a member of the First Presbyterian Church in Bristow where she served as secretary. Vandetta was president of the P.T.A, a Cub Scout Den Mother, and willing volunteer wherever needed. In Lindsay, she was a member of the First Methodist Church, Progressive Study Club, Bridge Club, the Hospital Auxiliary and a supporter of the Civic Arts. Vandetta was an avid reader, enjoyed crossword puzzles, entertaining friends, traveling and especially spending time with her grandchildren. She and her husband founded Lynn Boyer, Inc. in 1955, and she remained an active participant throughout her life. Her countenance was bright and cheerful, her ready smile and pleasant disposition was uplifting to all who knew her. She was truly a wonderful and lovely person. Vandetta is survived by her daughter, Yvette and husband Jerry Thomason of Durant, OK; son, Lynn and wife Cathy of Ardmore, Ok. Four grandchildren, Ashley Massey of Frisco, TX; Jennifer and husband Tal Franklin of Dallas, TX; Shawn Boyer and wife Holly of Ardmore, and Clint Boyer also of Ardmore, OK. Five great grandchildren; Brooke and Blake Massey of Frisco, TX; Kelsey and Jarod Boyer of Ardmore, OK and Collin Boyer of Edmond, OK. Services will be held at 10:00 a.m., Thursday, December 6, 2001 in the chapel of B.G.Boydston Funeral Home in Lindsay with Rev. George Lupton officiating. Interment will be at Woodland Cemetery in Cleveland, OK at 3:00 p.m. Memorials may be viewed online at www.boydstonfuneralhome.com. Arrangements are under the direction of the B.G. Boydston Funeral Home of Lindsay, OK.

Vandetta Wayne Boyer beloved wife, mother, grandmother and friend passed away in the presence of family on December 2, 2001. Vandetta was born in Cleveland, OK on November 18, 1921 to Forest and Margaret Hopkins. She graduated from Cleveland... View Obituary & Service Information

The family of Vandetta Boyer created this Life Tributes page to make it easy to share your memories.

Send flowers to the Boyer family.