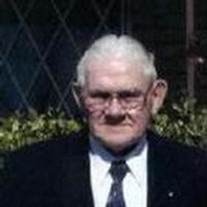 V. M. "Max" Terry age 80, of Lindsay, OK passed away at his residence in Lindsay on Nov. 15, 2001. He was born in Edmond, OK on Nov. 9, 1921 to Charles Howard Terry and Bonnie Julia Doxsie Terry. Max graduated from Edmond High School in 1940. He served in the South Pacific as a Sergeant during WW II from Sept. of 1942 to Oct. 1945 in the Communication and Transportation Corp. He moved to Lindsay in 1956 to work for Phillips Petroleum Gasoline Plant and retired in 1983. Max was a member of the Lindsay First Christian Church for 45 years. He served as deacon and property committee chairman for many years. He was also a member of the Edmond Masonic Lodge for 54 years. After retiring he enjoyed working in his garage. He worked on bicycles, lawn mowers, and kept up all the families cars. He loved to work at his church. Max was preceded in death by his wife Hazel Lorene Nelson Terry on May 30, 2001. They were married on Jan. 12, 1946 in Edmond, OK. He is survived by one daughter, Cynthia Ann Terry Malicoat of Cyril, OK; and son, Michael Howard Terry and wife, Mitzi of Altus, OK. Grandchildren are Christopher Scott Malicoat of Lindsay; Marce Chenelle Terry Marple and husband, Jody of Perry, OK; and Matthew KC Terry of Altus, OK. Great grandchild, Destani Shyne Malicoat of Lindsay. He has one surviving sister, Edythe Terry Bash and husband Dean of Edmond; Three sisters-in-law, Christine Terry, Edmond; Ruby Nelson, Chickasha; Mildred Nelson Birdwell and husband, Jack of McCloud, OK. One aunt, Faye Terry Sargent, Buhler, KS. Several nieces and nephews and many friends. He was preceded in death by both parents; four brothers, Sammy Lee, Nelson Dee, Charles Wendell and Sidney Wayne Terry and one sister Meroe Terry Bruce. Funeral arrangements are with B. G. Boydston Funeral Home in Lindsay. Services will be in the Lindsay First Christian Church in Lindsay on Saturday, Nov. 18, 2001 at 2:30 p.m. with Rev. Jane Worden, presiding and Kim Mays, Assisting. Burial will be in Green Hill Cemetery with Military Honors by the Lindsay American Legion Post # 23. Pallbearers will be the Scott Malicoat, Matt Terry, Jody Marple, Ryan Riddle, Bill Clements, and Bill Walker. Honorary pallbearers will be all Deacons, Deaconesses and Elders of the First Christian Church; John Branch, Danny Henson, and Coach Joe Tunnell. The family has requested memorial gifts be made to Lindsay First Christian Church.

The family of V. M. Terry created this Life Tributes page to make it easy to share your memories.

Send flowers to the Terry family.