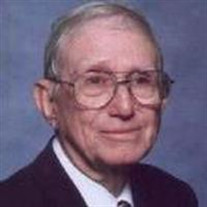 Urel Wayne Lacy was born September 14, 1918 in Lindsay, Oklahoma. He departed from his life June 17,2002 in Oklahoma City. Urel grew up in Lindsay, Oklahoma and graduated from Lindsay High School in 1936. He attended Central State Teachers College (now UCO) and graduated in 1940. He received his masters in education at the University of Oklahoma in 1957. Urel married Vivian Ruth Freeman on May 20, 1939 and they shared 63 wonderful years together. Urel was a member of the Lindsay United Methodist Church for 47 years and was a member of the choir for 34 years. He was the self-appointed church greeter and wanted to make sure that everyone felt welcome when they came to church. He transferred his membership to New Hope United Methodist Church when he and Vivian moved to Oklahoma City in 2001. Urel loved teaching, especially American History, which was his first love. He first taught at the Hughes Consolidated School district in Lindsay, Oklahoma. He and Vivian then moved to Erick, Oklahoma in 1945, where he served as principal for 3 years, and later as superintendent. They moved back home to Lindsay in 1953. Urel taught American History at Lindsay High School until 1964, when he became high school counselor. He retired from teaching in 1976. In addition to teaching, Urel also farmed in Lindsay. Urel loved to travel and did a lot of traveling after his retirement. He loved to watch birds and always made sure there was plenty of bird food outside in his bird feeders. He also enjoyed photography, making videotapes and woodworking. Urel was a people person and loved meeting and talking to people. He made friends everywhere he went. One of his favorite activities in Lindsay was going to Wal-Mart every day and visiting with all of his friends. Urel was a devoted husband and father, was loved by many and will be deeply missed. Urel was preceded in death by his parents, Clarence and Sarah Lacy and his four brothers, Everett, Herschel, Isaac and Lester. He is survived by his loving wife, Vivian Lacy; his son and daughter-in-law, Forrest and Loretta Lacy and their two sons, Justin and Travis Lacy, along with many loving nieces and nephews, and a host of very special friends. Funeral services will be held Friday, June 21 at 10:30 a.m. at the Lindsay United Methodist Church, with burial to follow at Green Hill Cemetery in Lindsay. Pallbearers are Dr. Jim Robberson, Tom Herrin, Darrell Richardson, Freddie Anderson, Chris Apel, and Jon Herd. Honorary pallbearers are Hoben Rogers, Tenys Parr, Joe Kennedy, Paul Sterr, Ralph Thomas, Don McCartor, Jim Crawford, Joe Howell, Bill Harrison, and James Harrison. Memorials may be viewed online at www.boydstonfuneral home.com Arrangements are with B. G. Boydston Funeral Home, Lindsay, OK.

The family of Urel Lacy created this Life Tributes page to make it easy to share your memories.

Send flowers to the Lacy family.