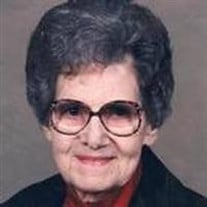 Thelma Vaught, "Dude" as she was often called by her family, was born March 26, 1912, to a pioneer family in Osage County, Oklahoma. She departed her earthly life on Sunday, September 7, 2003 and now resides with her Lord and Savior, Jesus Christ, in that house not made with hands. Her father, of French descent, was John William Lebert, and her mother, Anna Jane Hilton. Her grandfather, John Henry Hilton, was a chuck-wagon cook on the Chisholm Trail and a member of Zack Millers "Old Time Cherokee Strip Cow- Punchers Association" at the famed 101 Ranch. Hilton settled In Oklahoma during the Cherokee Strip Land Run. Thelma Vaught grew up on the family farm in Burbank, Oklahoma, graduated in 1929 from Burbank High School, and served as a cashier at Burbanks Farmers State Bank for nine years. On April 20, 1939, she married William Carl Vaught. Her husband, from a pioneer Oklahoma family of professional blacksmiths, was employed in the Burbank and Duncan, and Lindsay, oil fields by the Cities Service Company. Carl was drafted into the US Army and served in the European Theater of Operations with the 1374 Engineers Petroleum Distribution Company. He was a participant in the Normandy Invasion on D-Day, 1944. Carl Vaught preceded his wife in death in 1983. In October, 1944, she gave birth to her only son, Lyndel. She deeply instilled in him a love for music, books, writing, and academic study. A woman of elegance, style, and dependability, with a fierce and passionate spirit of independence, Thelma Vaught remained a constant source of encouragement an inspiration to her beloved son. After living in Walter, Frederick, and Duncan, she and her family moved to Lindsay in July 1957. A resident of Lindsay for 46 years, she was well known for her Bible teaching, sewing, painting, and yard filled with a vast array of colorful flowers. Her deep and abiding faith in God and a love for others was seen in many quiet, humble ways. She was quick to smile, ready to laugh, and willing to help those in need. No task was too difficult because Thelma earnestly believed in the words of the Apostle Paul, " I can do everything through Him who gives me strength." She is survived by her son, Lyndel, and his wife, Janet, of Burleson, Texas; three grandchildren and their spouses, Andrea and Chris Irvin of Texas, Chris and Tammy Vaught of Detroit, Michigan, Matthew and Erin Vaught of San Angelo, Texas; four great-grandchildren, Becki, Jake,and Ryan Irvin of Hico, Texas, Lindy Jordan Vaught of San Angelo, Texas; and a host of extended family and friends. Her son and the Reverend Chris Irvin will officiate. The entire family will participate in her memorial service. The family wishes to extend its deepest appreciation to the staff and administration of Pauls Valley Health Care Facility, and Dr. Steven Moore for the loving care they gave her. She will be interred, beside her husband, in Resthaven Memorial Gardens, Duncan, Oklahoma. Services will be Thursday, September 11, 2003, at 10:00 a.m. the First Baptist Church in Lindsay, Oklahoma. Interment is schedualed for 2:30 p.m. Thursday afternoon at Resthaven Memorial Cemetery in Duncan, Oklahoma. Public visitation will be at the Funeral Home Tuesday evening from 5:00 to 8:00 p.m., and Wednesday from 8:30 a.m. to noon and 1:00 p.m. to 8:00 p.m..

Thelma Vaught, "Dude" as she was often called by her family, was born March 26, 1912, to a pioneer family in Osage County, Oklahoma. She departed her earthly life on Sunday, September 7, 2003 and now resides with her Lord and Savior, Jesus Christ,... View Obituary & Service Information

The family of Thelma J. Vaught created this Life Tributes page to make it easy to share your memories.

Thelma Vaught, &quot;Dude&quot; as she was often called by her family,...

Send flowers to the Vaught family.