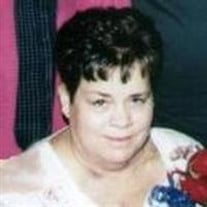 Susan Pearl Vaughn, Age 48. of Lindsay, OK passed away on Monday, April 30, 2001 at the University Hospital in Oklahoma City. She was born April 7, 1953 to William Robert "Bill" Holman and Lena Pearl Lee Holman in Borger, TX. Susan grew up in the Lindsay area and was a member of the New Heights Church of Christ. She enjoyed bowling, needlepoint, reading, spending time with her grandchildren and family. Susan was a mother and housewife. Survivors include her husband Jerry Lynn Vaughn of the home, they were married on June 12, 1971 in Lindsay, OK; mother, Lena Pearl Lee Holman of Lindsay; children, Susan Michelle Vaughn of Lindsay, Jarrod William Vaughn and wife Iona of Lindsay, OK, and Jennifer Rhea Vaughn of Pauls Valley; sisters, Beth Taylor and husband Clinton of Lindsay, and Karren Conder and husband Milton of Lindsay; brother, Robert Holman and wife Tammy of Lindsay; grandchildren, C. J. Johnson of Lindsay, Chad Vaughn of Pauls Valley, Layne Vaughn of Pauls Valley and M?Kayla Vaughn-Greywolf of Lindsay; and many aunts, uncles, cousin, nieces, nephews and friends. She was preceded in death by her father and one nephew, David Joe Holman. Services are under the direction of the B. G. Boydston Funeral Home of Lindsay. They will be held Wednesday, May 2, 2001 at the B. G. Boydston Funeral Chapel at 2 pm with Keith Lough officiating. She will be laid to rest at the Green Hill Cemetery in Lindsay. Pallbearers are Donnie Hassler, Melvin Hassler, B. J. Branch, B. K. Gibson, David Elam, and Wesley Arter. Honorary Pallbearers are Daryl Arter, Tommy Shelton, Vernon Trammell, Buddy Harrell, and Tommy Grenard.

The family of Susan Pearl Vaughn created this Life Tributes page to make it easy to share your memories.

Send flowers to the Vaughn family.