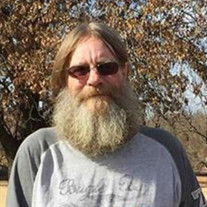 Stephen Lambert, long time resident of Lindsay, Oklahoma, passed away suddenly on April 15, 2021, at the age of 63. Steve’s journey began on March 10, 1958 when he was born to Betty-Anne (Lovewell) Lambert and Billy Lambert in Gardner, Massachusetts. Steve attended Narragansett Regional High School in Baldwinville and graduated in 1976. After graduation, Steve moved to Odessa, Texas where he fell in love with Debbie Easlon and they soon married. Steve and Debbie had one son, Stephen Wesley Lambert III, and they settled down and raised their son in Lindsay. In his younger years, Steve loved collecting and working on cars, hunting and fishing. Later in life, Steve enjoyed riding his harley and hanging out by his swimming pool. He savored the simple things in life such as sipping on his coffee or a cold beer and watching NASCAR. He remarried to Sheila Lovelady in 2012. Steve spent most of his career working in the oil and gas industry. He is survived by his son and daughter in law, Stephen and Ashley Lambert and grandchildren Kole and Brooklyn Lambert, sister Rhonda Barsamian, brother Billy Lambert and his wife Brigid, nieces Tiffany Barsamian, Alysse Bendel, Shannan Lambert and nephews Jordan Barsamian and Devon Barsamian. Steve was preceded in death by his parents Billy and Betty Lambert, and his wife Sheila Lambert. Per the wishes of Stephen and his family he was cremated and there are no services at this time. There will be a private family gathering at a later date. Arrangements are under the direction of Scott and Angel Wilbourn of Wilbourn Family Funeral Home in Lindsay, Oklahoma. Condolences may be made to the family online at www.wilbournfamilyfuneralhome.com

Stephen Lambert, long time resident of Lindsay, Oklahoma, passed away suddenly on April 15, 2021, at the age of 63. Steve&#8217;s journey began on March 10, 1958 when he was born to Betty-Anne (Lovewell) Lambert and Billy Lambert in Gardner,... View Obituary & Service Information

The family of Stephen Wesley Lambert created this Life Tributes page to make it easy to share your memories.

Send flowers to the Lambert family.