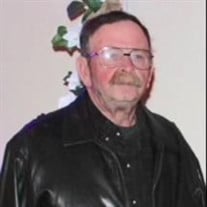 Stanley Ralph Miller was born in Lindsay, Oklahoma on December 4, 1951, to Harry O. and Dorothy Lee (Ballard) Miller. He passed from this life surrounded by his loving family in Oklahoma City, Oklahoma on March 5, 2022, at the age of 70. Stanley was brought up and raised in the Lindsay community. He was a graduate of Lindsay High School and earned a degree in Agricultural Economics from OSU. After college, Stanley returned to Lindsay and to the family farm. He then married the love of his life, Doris Kay Webb. They raised two sons, Brandon and Joshua, both of whom still reside in the Lindsay area. Stanley and his family are members of the Lindsay Methodist Church. Stanley farmed for over 55 of his 70 years, even up to his last day. Farming was his life; he wouldn’t have wanted it any other way. Stanley was a hardworking, yet humble man. He never turned down the opportunity to help any of his neighbors. Whether it was working calves, building fences, drilling wheat, or cutting hay, Stanley was always going and doing something productive. Stanley was an avid member of the Oklahoma Farm Bureau for much of his life. He served in the Young Farmers and Ranchers program, and later he was an active member of the Garvin County Farm Bureau Board of Directors. Stanley also served on the OKFB State Board of Directors. The time he spent working toward the causes of his profession was often tedious. However, Stanley always made time for his family and his faith. His favorite vacations were taking fishing trips to Lake Texoma with his father and his children. Stanley was a Scoutmaster for many years. His favorite story that he told often was of the time on a camping trip when a certain scout inadvertently used poison oak on their backside. Stanley reminded his family frequently that they always ought to “Be prepared”; not just in Scouts, but also in life. Stanley is preceded in death by his parents, Harry and Dorothy Miller, brother, Richard Miller, and his lifelong love, Doris Kay Miller. Left to cherish Stanley’s memory and mourn his passing are his sons: Brandon with his wife Amy and daughters Miranda, Alanna, and Courtney, and Joshua with his wife Letisha and sons Bradley and Andrew; his sister, Carol Miller Vaught of Mustang, Oklahoma; and his brother, Don Miller of Waco, Texas. Stanley also leaves behind several nieces, nephews, and cousins, along with countless friends and neighbors. He will be sorely missed by all who knew him well. A funeral service to honor the life of Stanley is set to begin at 2:00 P.M. on Thursday, March 10, 2022, at the United Methodist Church located in Lindsay, Oklahoma. He will be laid to rest following the service at the Green Hill Cemetery in Lindsay, Oklahoma. Services are under the direction of Scott and Angel Wilbourn of Wilbourn Family Funeral Home in Lindsay, Oklahoma. Condolences may be made to the family online at www.wilbournfamilyfuneralhome.com

Stanley Ralph Miller was born in Lindsay, Oklahoma on December 4, 1951, to Harry O. and Dorothy Lee (Ballard) Miller. He passed from this life surrounded by his loving family in Oklahoma City, Oklahoma on March 5, 2022, at the age of 70. Stanley... View Obituary & Service Information

The family of Stanley Ralph Miller created this Life Tributes page to make it easy to share your memories.

Stanley Ralph Miller was born in Lindsay, Oklahoma on December...