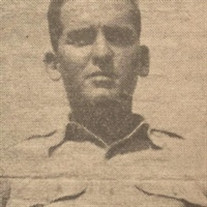 On September 27, 1928 a hero was born. It seemed like an ordinary day when Sergeant Ollie Edward Shepard entered the world in Pauls Valley, Oklahoma to Willis and Nancy Shepard, but he soon would do extraordinary things. Ollie was the second of ten children born to Mr. & Mrs. Shepard; he had five brothers and three sisters. He was described as a quiet studious young man, a good boy who never got in any trouble. Ollie spent most of his life in Pauls Valley. As a teenager he attended the Forney High School and when he was not at school he was helping his father on the farm. But December 29, 1948 was a turning point in his life, for that was the day Ollie made the momentous decision to enlist in the United States Army. Ollie completing basic training at Camp Chaffee in Arkansas.  There he distinguished himself as an outstanding marksman and became a sharpshooter for the Army.  On April 4, 1949, he was sent to Japan, and shortly thereafter he was transferred to serve with the 31st Infantry in Korea. But he did not forget his family back home and would frequently write letters talking about how he couldn’t wait until he could be with them again.  In one letter he wrote how he would “be glad when this battle is over so I can come home.” Because SGT Ollie Shepard was a sharpshooter, he was in the front lines of not one or two, but three major battles in the Korean War. This was very unusual, and because of this he received many rewards and commendations for bravery and valor, including the Purple Heart.  Such bravery is truly commendable in anyone, but it is especially commendable in a young man of just 22. Then on January 12, 1951, Mr. & Mrs. Shepard received a letter from the war department that no parent ever wants to get. Their son, SGT Ollie Shepard had been missing over a month, since December 3, 1950.  This letter began a nightmare that they never got over.  Ollie’s mother, Nancy, would listen for the names called at every POW exchange in hopes that Ollie’s would be one of the names called.  Even after receiving official word from the adjutant general’s office in Washington that due to the lapse of time, without any information SGT Ollie Shepard was presumed dead at the end of December, 1953, his parents still didn’t give up hope. For, as Ollie’s father, Willis said, “We can’t help but keep on hoping, as boys who’ve been lost for years are still showing up.”  And that hope mixed with the questions and unknown until the day they died.  After over 67 years Sergeant Ollie Edward Shepard is finally coming home! On Wednesday, February 7, 2018, at 1:00 P.M. Ollie will be laid to rest beside his mother and father at the Bradley Cemetery in Bradley, Oklahoma. A graveside service with full military honors will celebrate the life and sacrifice of a local hero, son, brother, uncle, and friend. His three surviving brothers, Lloyd Shepard and wife Rita, Dansby Shepard and wife LaQuetta, and Hubert Shepard and wife Lana, and one surviving sister, Henrietta Spangler are happy to see their brother Ollie laid to rest next to their parents where he belongs. Ollie is preceded in death by his parents Willis and Nancy Shepard, three brothers, Dub, Floyd, and Gene Shepard, and two sisters, Helen Rawls and Betty Briscoe. Services are under the direction of Scott Wilbourn with Boydston Funeral Home in Lindsay, Oklahoma.

On September 27, 1928 a hero was born. It seemed like an ordinary day when Sergeant Ollie Edward Shepard entered the world in Pauls Valley, Oklahoma to Willis and Nancy Shepard, but he soon would do extraordinary things. Ollie was the second... View Obituary & Service Information

The family of Sgt Ollie Edward Shepard created this Life Tributes page to make it easy to share your memories.