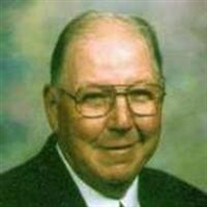 Roy Cooper, 71 years, 4 months and 12 days, departed from this life in Grace Living Center on Nov. 4, 2001 to be united with his Lord and Savior. He was born on Salt Creek in Maud, OK to Martin Calvin and Sarah Esther (Wright) Cooper on June 23, 1930. He spent his childhood in the Maud, OK area. He came to Lindsay with a job for Johnny Shannon Pipeline Service. While at Harold Steakhouse his fixed gazing captured the attention of Leora England. She introduced herself to him and they made a date for her breaktime from the telephone company. After a five week courtship they were married on Jan. ll, 1952 and would spend 49 years, 9 months and 24 days together before his passing. To this union they were blessed with three children: Gary Cooper and wife, Debra of Haslet, TX; Carolyn Malena and husband, Joe of Lindsay; and Danna Hutchison and husband, Mark of Lindsay. Grandchildren are: Christopher Malena and wife, Pam of Pensacola, FL; Cathryn Cooper of Oklahoma City; Stacy Brown and husband, Rudy of Oklahoma City; Kandace Malena at ECU in Ada, OK; Cash Cooper, Lindsay; Mike and Angi White of Yukon, OK; Jennifer and Ted LeGrande of Oklahoma City; and Natalie and Brian Brodnax, Watauga, TX. Great grandchildren: Mason Brown, Matthew and Alexiss Legrande, Cody and Cory White and Samantha and Madison Brodnax. Other survivors are his siblings, O.H."Bill" Cooper of Elk City, OK; Edith (Cooper)Kolar of Los Angeles; and Charles Cooper of Ft. Worth, Texas. He was preceded in death by his parents; baby brother, Arther; sisters, Edna Oretha "Lil Pete" Cooper, Violet Hill and Alice Scruggs. In-laws, Claud and Frances (Henry) England; Dick Landers; Rose and Willie England; Jean England; and Arbee England. Roy worked with the pipeline company until he started working for T.J and Ross Goodner in Aug. 1953. He retired from the grocery business in June 1992 after 39 years as Produce Manager. With his love of outdoors he started mowing lawns and trimming trees and shrubs. Part of his enjoyment was getting to spend time talking to the "Little widow ladies" after he finished their lawns. He loved growing his garden, raising rabbits and bees, fishing with his grandson, Christopher, and listening to his brother-in-law Horace stories. He enjoyed watching Animal Planet, Nature Shows and Football on TV; going to school and church activities for his kids and grandkids, and having coffee and visiting with relatives and friends. Being a man that only knew how to work hard he continued his labors trying to recover from a stroke on April 29, 2001. During this time his family was able to see his gentle side and quick wit while making many acquaintances at Deaconess, Norman Rehab, and Grace Living Center, where they would exclaim what a nice, pleasant man he was. Services will be Wed., November 7, 2001 at 2:00 p.m. in the B. G. Boydston Funeral Chapel in Lindsay with Rev. J.C. Venable and Rev. David Reddick presiding. Casketbearers will be Gary Cooper, Christopher Malena, Claude England, Jim England, Charlie Watkins and Rocky Hopkins. Honorary pallbearers will be Cash Cooper, Gerald England, Al Dodd, Danny Simonton, Mark Loman, David Daniels, Ray Webber, M.E. Sharp, Bill Martin, Melvin Cowden, Wayne Crews, John Hornbeck and staff at Grace Living Center. Interment will be in Green Hill Cemetery. The family has selected Good Shepard Hospice as their charity of choice.

Roy Cooper, 71 years, 4 months and 12 days, departed from this life in Grace Living Center on Nov. 4, 2001 to be united with his Lord and Savior. He was born on Salt Creek in Maud, OK to Martin Calvin and Sarah Esther (Wright) Cooper on June... View Obituary & Service Information

The family of Roy Cooper created this Life Tributes page to make it easy to share your memories.

Send flowers to the Cooper family.