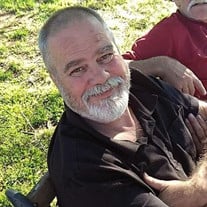 Ronald “Pops” Lee Johnson passed away on February 1, 2022, in Oklahoma City, Oklahoma, at the age of 63. He was born to Robert Lee Johnson, and Lena Jo Emberlin on May 30, 1958, in Oklahoma City, Oklahoma. Ronnie lived most of his life in Oklahoma City, Oklahoma. He has been a resident of Lindsay, Oklahoma for the last 13 years. He spent his working life hanging drywall. Ronnie married Weldonna Louise Stubblefield in Oklahoma City, on February 26, 1993. They would have celebrated their twenty-ninth wedding anniversary later this month. Ronnie was a die-hard OU sooner football fan. He loved watching their games and cheering them on. At his core, he was a family man and he cherished the time they shared. He loved family cookouts and holidays shared. He will be greatly missed by all who knew him. Left to cherish his memory is his wife, Weldonna Johnson of Lindsay, his daughter, Twyla Eddins of Oklahoma City, his son, Cody Johnson of Lindsay, his stepson, Cruz Walker of Lindsay, his brother, Bobby Johnson of Lindsay, and four grandchildren. He also had, lots of nieces, nephews, cousins, and friends. He is preceded in death by his parents, Robert and Lena Jo Johnson, sister, Debrah Johnson, and sister-in-law, Regina Johnson. Per his wishes and the wishes of his family, Ronnie was cremated and there are no services at this time. Arrangements are under the direction of Scott and Angel Wilbourn of Wilbourn Family Funeral Home in Lindsay, Oklahoma. Condolences may be made to the family online at www.wilbournfamilyfuneralhome.com

The family of Ronald Lee Johnson created this Life Tributes page to make it easy to share your memories.

Send flowers to the Johnson family.