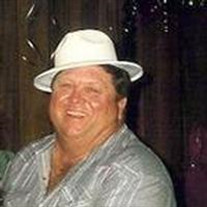 Richard Guy "Wildcat" Mantooth, age 49, Wildcat passed away on August 9, 2004. He was born in Pauls Valley, Oklahoma on October 14, 1954 to Jerry Leon Mantooth and Dorothy Lee Scott Mantooth. He was raised on the family farm North of Lindsay and graduated from Lindsay High School. Richard was a member of the First Christian Church, was active with the Future Farmers of America where he was awarded the State Farmer degree. He also belonged to the Elks Lodge and the Masonic Lodge. Wildcat enjoyed farming, being a dozer operator (playing in the dirt), and visiting with friends and family. He never met a stranger and was loved by all. He liked to cook and he was always available to lend a helping hand. He had a variety of occupations which he enjoyed, being a rancher, oilfield equipment operator and he enjoyed his work with Bruce Jones Oilfield Service Company. Richard is preceded in death by his father, J.L. (Jody) Mantooth, his grandparents, Sam and Julia Mantooth, Guy and Hazel Scott. Richard is survived by his mother, Dorothy Lee Mantooth of Lindsay, Ann Pratt, (Mama # 2), his fiancée Debbie and her daughter Lauren Meredith, his daughter, Amy and her husband, Clark Richardson of Norman, Oklahoma. He is also survived by one son, Carl and his wife Joanne Mashburn of Phoenix, Arizona. Richard leaves behind two brothers, Joe Ray (Curly) Mantooth and his wife Mercy, and David (Lum) Mantooth and his wife Shelley, and numerous friends and family members. Services for "Wildcat" will be held at the United Methodist Church, Lindsay, Oklahoma on Friday, August 13, 2004 at 10:00 a.m. Interment will be at Green Hill cemetery, Lindsay, Oklahoma. Public viewing will be Wednesday afternoon from 1:00 to 8:00 and Thursday 8:30 a.m. to noon and 1:00 p.m. to 8:00 p.m. Arrangements are under the direction of B. G. Boydston Funeral Home in Lindsay, Oklahoma. Condolences may be sent to the Mantooth family online at www.boydstonfuneralhome.com

Richard Guy "Wildcat" Mantooth, age 49, Wildcat passed away on August 9, 2004. He was born in Pauls Valley, Oklahoma on October 14, 1954 to Jerry Leon Mantooth and Dorothy Lee Scott Mantooth. He was raised on the family farm North of Lindsay... View Obituary & Service Information

The family of Richard G. Mantooth created this Life Tributes page to make it easy to share your memories.

Send flowers to the Mantooth family.