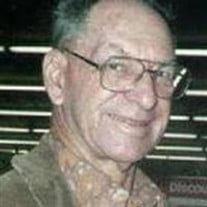 Raymond E. Engle, age 90, of Lindsay, OK passed away December 8, 2001 in St. Michaels Hospital in Oklahoma City. He was born May 5, 1911 in Kiefer, OK to Raymond E. Engle I and Margie Jane Elms Engle. In 1955, Raymond moved to Bradley, OK, in 1967, he moved to Lindsay, OK and in 1973 he moved to Erin Springs. Raymond was a member of the Erin Springs Baptist Church. He was an oil pumper for City Service where he worked for them for 42 years and he loved working in his yard. Raymond is survived by his wife, Fannie Pearl Johnson Engle of Erin Springs. They were married in Maud, OK and were married over 71 years. He is also survived by his son David Engle and wife Virgie of Erin Springs, two brothers, Leland Engle of Tulsa, OK and Harold Engle and wife Lula Mae of Pampa, TX. Seven grandchildren, Sue Henderson, Bud Tarver both of Lindsay, Clayton Tarver of McAlester, Diantha Popplewell of Tulsa, Ann Basinger of Garland, TX, J.D. Engle of Quitman, TX and Jan Gharst of Longview, TX. Sixteen Great grandchildren and 26 Great great grandchildren. He is preceded in death one son Raymond Engle III, four sisters and by both parents. Services are scheduled for Tuesday, December 11, 2001 at 2:00 p.m. in the Erin Springs Baptist Church with Rev. Bill Love officiating. Raymond will be laid to rest in Erin Springs Cemetery in Erin Springs. Pallbearers will be his grandsons and great grandsons, Clayton Tarver, Bud Tarver, Sam Tarver, Charles Bagley, Justin Bagley and Jeremy Bagley. Honorary pallbearers will be the Deacons of Erin Springs Baptist Church. Memorials may be viewed online at www.boydstonfuneralhome.com. Arrangements are under the direction of the B. G. Boydston Funeral Home of Lindsay, OK.

The family of Raymond E. Engle created this Life Tributes page to make it easy to share your memories.

Send flowers to the Engle family.