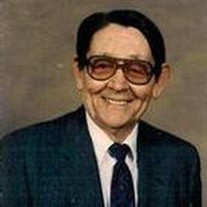 Ray Webber, age 83, passed away October 4, 2004, at Norman Regional Hospital. He was born May 13, 1921, in Stonebluff, Oklahoma, to Ed and Stella Webber. Ray married Violet Warrington on September 18, 1941. He worked in the oil field industry and retired from ARCO in 1982. Ray served his country in Europe from 1943 to 1945 with Co. 1 275th Inf. Regt. 70th Div.. He was a very active member of the First Baptist Church in Lindsay where he served as a Deacon. He dearly loved both his church and his church family and was always faithfully doing the Lord?s work. Ray was preceded in death by his parents, his twin sister, Fay Elrich, sister, Lena Mae Long and brother, Edward Webber. He is survived by Violet, his wife of 63 years, one sister and brother-in-law, Juanita, and Bob Vandergriff, one son, and his wife, Tom and Janis of Kalamazoo, Michigan, two granddaughters, Holly Long and husband Devale of Norman, Oklahoma, and Stacy Williams of Kalamazoo, Michigan. Four great-grandchildren, Tommy Ray Long, Stephany Williams, Steve Williams, and Stefen Williams, two step-granddaughters, Desha Long and Kim and husband Justin Cano, two step great-grandchildren, Jaylen Long and Levin Cano, along with numerous nieces, nephews, cousins and close friends. Services for Ray will be held on Thursday, October 7, 2004, at 11:00 a.m. at the First Baptist Church, Lindsay, Oklahoma, with Rev. Randy Allen and Rev. Aaron Lokey officiating. Interment will be at the Little Cemetery in Seminole County. Memorial contributions may be made to the Children?s Baptist Home by contacting the office at the First Baptist Church, Lindsay, Oklahoma. Funeral services are under the direction of B. G. Boydston Funeral Home. Condolences may be sent to the Webber family online at www.boydstonfuneralhome.com.

Ray Webber, age 83, passed away October 4, 2004, at Norman Regional Hospital. He was born May 13, 1921, in Stonebluff, Oklahoma, to Ed and Stella Webber. Ray married Violet Warrington on September 18, 1941. He worked in the oil field industry... View Obituary & Service Information

The family of Ray Webber created this Life Tributes page to make it easy to share your memories.

Send flowers to the Webber family.