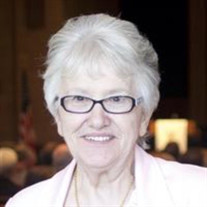 Peggy Joyce (Wood) Manning was born on October 2, 1941, in Lindsay, Oklahoma, to Albert Wood and Lurene Eddie (Johnson) Wood. She passed from this life on December 25, 2020, in Oklahoma City, Oklahoma, at the age of 79. Peggy had been a resident of Marlow, Oklahoma for the past ten years. She was born and raised in Lindsay, Oklahoma. She was a member of the First Christian Church in Canadian, Texas. She spent her working life in restaurants and elder care. Peggy enjoyed keeping her hands and mind busy with crocheting, coloring, crossword puzzles, and jigsaw puzzles. She loved spending time and visiting with family and friends. Her family was her greatest treasure in life. She touched the lives of many and will be greatly missed. In the words of her son, “Peggy was at her best in the presence of others; be it her family, friends, customers, coworkers in a restaurant or sitting with those requiring long-term care.” Left to cherish her memory is her children, Hoyt Manning and wife Jo of Canadian, Texas, Holly Tecumseh and husband Carl of Marlow, Oklahoma, and Paula Manning of Duncan, Oklahoma, her sister, Glenda Parker and husband Odell of Lindsay, Oklahoma, her brother, Larry Wood of Lindsay, Oklahoma, her grandchildren, Scott Manning and wife Kim of Marlow, Oklahoma, Desirae Havens and husband Luke of Kingfisher, Oklahoma, Dustin Manning of Marlow, Oklahoma, Alex Manning of Duncan, Oklahoma, and David Tecumseh of Marlow, Oklahoma, and great grandchildren, Jayson Manning, James Manning, Savanna Havens, Lily Havens, Arabella Manning, and Liam Manning. She is preceded in death by her parents, Albert and Lurene (Johnson) Wood, grandparents, Henry and Hattie (Crawford) Johnson, Robert and Flora (Stiles) Wood, a sister, June Linder, brother-in-law, Carl Linder, and sister-in-law, Faye Wood. In lieu of flowers the family kindly asks that donations be made to Peggy’s favorite charity: St. Bonaventure Indian Mission and School, P.O. Box 610 Thoreau, New Mexico, 87323 or stbonaventureindianmission.org. Per the wishes of Peggy and her family she was cremated and a memorial service will be held at a later date. Arrangements are under the direction of Scott and Angel Wilbourn of Boydston-Wilbourn Funeral Home in Lindsay, Oklahoma. Condolences may be made to the family online at www.boydstonfuneralhome.com

Peggy Joyce (Wood) Manning was born on October 2, 1941, in Lindsay, Oklahoma, to Albert Wood and Lurene Eddie (Johnson) Wood. She passed from this life on December 25, 2020, in Oklahoma City, Oklahoma, at the age of 79. Peggy had been a... View Obituary & Service Information

The family of Peggy Joyce Manning created this Life Tributes page to make it easy to share your memories.

Send flowers to the Manning family.