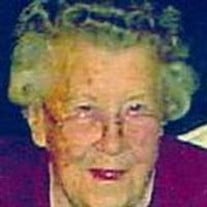 Pauline Robertson, age 90, of Lindsay, passed away June 1, 2003 at Pauls Valley General Hospital. She was born in Bailey, Oklahoma on December 12, 1912 to Calvin Milligan and Ada Owens. She ran two cafes was a homemaker and a farmer, before... View Obituary & Service Information

The family of Pauline Robertson created this Life Tributes page to make it easy to share your memories.

Send flowers to the Robertson family.